NYFF: Somos Lo Que Hay/We are what we are 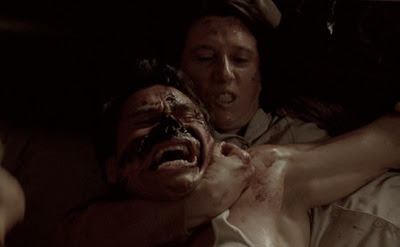 Romania, Israel, Korea, Chile, Argentina, are countries that have few resources to allot to filmmaking, yet they have produced a generation of immensely talented filmmakers and a host of extraordinary movies in recent years. They all seem to have encouraged a cottage industry of quality films despite their limited resources. After the great promise that was shown by Mexican films like Amores Perros and Y Tu Mamá También, which happened a more than a decade ago, Mexico seemed poised to burst out with a cinema of consistent quality. Alas, except for a few dignified exceptions (Carlos Reygadas, not my cup of tea but a darling of the cineastes, or Fernando Eimbcke), it really has not come to pass the way it should have. I don't begrudge the Three Amigos (Cuarón, González Iñárritu and Del Toro) their having decamped to the greener pastures of Hollywood. But it is worth noting that the great movies coming out of small countries are made by filmmakers who are working there and creating films about life at home. Mexico needs to nurture its homegrown talent and encourage it to stay there. Also, someone needs to start writing better movies. Staying home is not enough.
I think that the programmers of the NY Film Festival have this wishful thinking that there is something of value to show coming from Mexico, but except for Reygadas' Silent Light, so far the Mexican films I have seen in the festival in the last couple of years, suck.
This year, I have watched at least a dozen films and except for this Mexican turd, they all have very high standards. If I can surmise any reason why this film made the official selection in this and other reputable festivals, I venture it's because its cannibalistic twist is a novelty for the horror genre. However, this should not be reason enough to foist it upon the audience. Somos Lo Que Hay is half baked and amateurish and a wasted opportunity. The idea is original enough, and with more artistic discipline and a more sensitive filmmaker, it could have amounted to something better. After all, a family of cannibals in Mexico City is ripe material for a horrific and terrific commentary about the disintegration of the social fabric in Mexico, or about horriifying Mexican social mores. But the execution is sloppy and mediocre. The movie is disgusting but not disturbing, and the worst sin for a horror film: it's not scary or entertaining. It has no suspense, no tension and nothing truly horrifies, except how bad it is. The acting is abysmal, coming as it does from the Mexican school of hamming, where no one ever speaks normally and every line is grounds for extreme overreaction. Everybody cries bitterly and with great gusto at all times, and when they don't cry, they mope, and when they don't mope, they scream at each other. The only bright spot is a little cameo by Daniel Giménez Cacho who plays a morgue employee who beautifies the corpses and considers himself an artist. He's fun to watch and I kept hoping he'd come back. No such luck.  It would have been fun if you ended up rooting for the cannibals; instead, you pray someone takes them out as soon as possible.
As usual, the weakest link is the script. The dialogues are beneath basic. I wonder if the writer/director, Jorge Michel Grau, who is a graduate from the Centro de Capacitación Cinematográfica, has not been taught that it is entirely amateurish to answer every statement uttered by a character with the retort "what!?".
Grau didn't take the trouble to think through the characters or the story. It sounds and works like a first draft by a film student. This is a family who eats people because of a ritual that the director thinks it smart not to explain to the audience. There is a difference between mystery and confusion, but I'm afraid he thinks they are one and the same. I think the ritual thing is a cop out; "lazy" is the word that comes to mind. Doesn't make any sense. With all the great junk food we have in Mexico, why are these people eating their neighbors? A taco de carnitas in any corner stand would hit the spot.
The little dark humor there is, gets lost in the weakness of the story. The movie is mercifully short (although it feels much longer), but it is underdeveloped. The tone bothered me the most: sordid, morbid, overwrought, heavy handed, inconsistent. It's a clichéd, tired Mexican sensibility that some of our better filmmakers have dispensed with, and that is about time we got rid of (after all, we've been making movies for about 100 years). Why do we have good actors that are forced to ham it up, great cinematographers and excellent crews that work on utter duds? Because you could probably count with the fingers of one hand the people who know how to write a screenplay.
Posted by Grande Enchilada at 10:40 AM