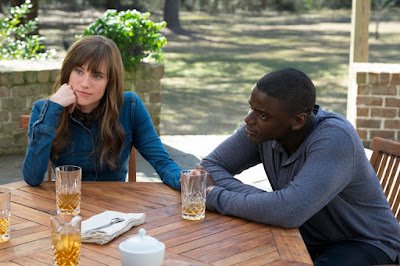 Or now you know how black people really feel about white people. This very funny and quite scary movie written and directed by comedian Jordan Peele is a feat of tonality. It can't be easy to make a scary movie funny, and a funny movie scary, but Peele achieves both. Even more admirable than funny and scary is how disturbing and polemical the movie aims to be.
The plot, which has no holes -- rare for a horror movie -- is simple: Rose, a white girl (the very game Allison Williams) takes her black boyfriend Chris (the excellent Daniel Kaluuya) to meet her parents (the great Catherine Keener and Bradley Whitford), somewhere deep in leafy, tranquil suburbia. Peele's hypothesis, which is shared by Chris's trepidation but not by Rose's enthusiasm, is that nothing good can come of that.
If you happen to be black, merely walking through the most bucolic white suburb can be fraught with menace. Rose talks back to a police officer in a way that could get her boyfriend tasered, beaten to a pulp, shot, or all of the above, and the officer just lets her go. This sets the tone for the rest of the film.
And then you have the well-meaning white people. They, and this is one of the movie's sharpest jabs, are the ones to worry about. Because Black people know where you stand if you are a wearer of white sheets. But if you are a hippyish wealthy liberal who insists on hugging you and saying "my man" every three words, they may not be so sure.
I once went to a Christmas brunch in a wealthy town in upstate New York and the white people there made the party guests in Get Out seem like a bunch of hippies. I have never felt more out of place anywhere, but that's another story. Peele gets it right, from their terrible Talbots outfits to their clueless, condescending bonhomie which includes an unhealthy obsession about Black male athletic and sexual prowess. Worse, the two Black people employed by Rose's parents (Betty Gabriel and Marcus Henderson, both great) are docile, polite servants, incapable of opinion or volition, let alone rebellion. There is something weird about them. It is later on that we realize with horror what that is.
Peele brilliantly translates racial issues into the tropes of a horror film. Horror films are about our deepest subconscious fears. This begs the question as to why nobody has explored the subject of American racism through horror before. Does it hit too close to home? Get Out certainly does, and that's what makes it so successful. Its multiple layers of satire work in parallel with the racial terror.
If the first part of the movie is about the frisson of social racial discomfort, the second part leaps into the horror scenario. This is symbolic, psychological territory that posits that Black lives may not matter to white people who continue to see black people as expendable property, regardless of how liberal they pretend to be. It's inflammatory, and I would say, timely and necessary stuff, which Peele leavens with a hilarious subplot involving a T.S.A. agent (the magnificent LilRel Howery).
To Peele's credit, the plot has no groaners. A big chunk of exposition explains why bad things happen to Chris, and there's a convenient coincidence, but everything is deftly handled through humor and solid plotting, and it works dramatically. Everything that is set up at the beginning is paid off neatly at the end. And you do not see the twists coming.
But what stays with you is the feeling of something deeply awry, of being all alone and out of place, of not really connecting with anybody, of having to decode and let pass all the crazy, uncomfortable stuff people say to you. Have you ever been in a house in the middle of nowhere in which you cannot connect, nor have anything in common with the people in it? That in itself is a horror. Is this a metaphor for how it feels like to live in America when you're Black? This movie is full of such potent, accurate metaphors.
There have been complaints that the movie is anti-white, but people need to get a hold of themselves. It's a broad satire that doesn't pull any punches. Get Out is a funny but seriously provocative polemic about race relations in America, cleverly disguised as entertainment.

Posted by Grande Enchilada at 2:15 PM No comments: Links to this post