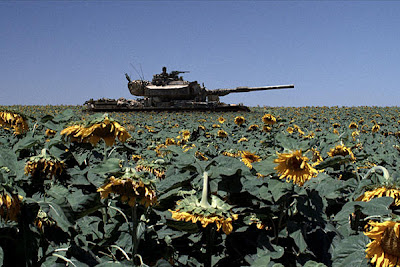 This Israeli movie, which won the golden Lion in Venice this year, is a faithful recreation of what it feels like to be inside a tank, inside a war. When I heard the premise, I didn't think it could work. The claustrophobia would be untenable. But somehow first time director Samuel Maoz and his cameraman have achieved an amazing film that feels claustrophobic and is tough to sit through but it isn't torture. It's a deeply humane film.
Maoz's achievement, which is based on his personal experience as a tank gunner in the first Lebanon invasion of 1982, is to distill the horror of war into such small quarters. The movie is not a political manifesto although it is a powerful statement against war. It is about how war destroys the human soul. How soldiers must contend with their own humanity in an extreme situation of life and death and unspeakable violence when all of a sudden they don't even know why they are there, existentially speaking (there will always be pretexts for war).
The movie makes us ask, what makes countries, leaders, send young men to Hell?
Is it worth the sacrifice? What price survival?
Posted by Grande Enchilada at 11:21 AM No comments: Links to this post