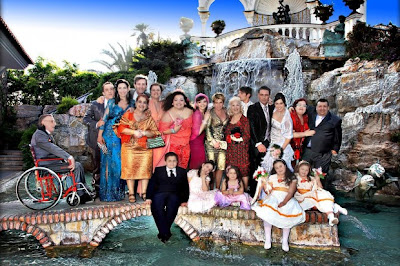 This film by Matteo Garrone (Gomorrah) is reminiscent of the great Italian comedies of the sixties, but it is squarely of today. Being about a man's obsession with entering a reality show, it has more than a whiff of the surreal. The Italians are masters at comedy that is both endearing and cruelly tragic.
It is no coincidence that Luciano (Aniello Arena), is hypnotized by the creepy vulgarity of Grande Fratello, Italy's version of Big Brother. Training cameras on human beings trapped in spectacularly decorated cages is not that far from Orwell's own Big Brother.
Luciano's is a painful, maddening and highly absurd journey, sort of like what life in Italy must be today, still under the crass, vulgarian sway of Silvio Berlusconi. We may laugh at Luciano's delusions but Garrone sticks the knife in as he explores his increasing madness. That the TV show is shot in Cinecittá, where all the great Italian films were once made, is only another heartless twist of the knife. Life in Italy has become a lurid travesty, and Garrone's nonstop fluid camera floats around the national decline in a lucid and feverish state.
The film begins with a surreal aerial shot of a gilded horse carriage through the streets of Naples. It alights at a garish wedding destination for struggling Italians. This is where Luciano first sets eyes on Enzo, the local hero of Big Brother, whose claim to fame is to have lasted about 130 days in that televised cage. Luciano, who is a born entertainer, starts believing he can make it to the program, which for the most part casts aspiring two-bit Italian professionals with big American dreams. He's just a fishmonger living in a fabulously dilapidated neighborhood with an extended, mostly matriarchal family (the cast is spectacular). He is a good, hardworking man whose mind gets hijacked by dreams of greatness (flying in and out of weddings via helicopter, as Enzo does, seems to be the height of aspiration). For his part, all Enzo does is pose with regular people and chant "never give up" in English, another cruel reminder of empty, if dangerously individualistic popular hallucinations. Follow your dreams, leave all common sense behind, never give up. Americans forget that these familiar exhortations are not always indigenous to other parts of the world. Italy is held together by family (and to judge by this movie, mothers who cook marvels at all times). This and the Catholic faith get swept aside in pursuit of a sad, lonely and nightmarish dream of "success".
Echoes of Fellini abound in Garrone's loving yet exasperated observation of his fellow countrymen, their penchant for the absurd, the dramatic, and the funny. It feels like he wants to get under their skin and shake them awake and away from the moronic inferno (to quote Martin Amis) they are living in. Reality meanders and is a bit unfocussed towards the end, with an ambiguous resolution that feels undercooked, but it is good, intense, bitter medicine. You'll laugh, you'll cry, as it should be.
Posted by Grande Enchilada at 11:48 AM No comments: Links to this post