Movie stars do ads in Europe that they wouldn't be caught dead doing in America.
At the movies there is a ridiculous ad for Schweppes with Nicole Kidman as some sort of Indian Bollywood princess in an uglyass fantasy sequence done by total hacks. I'm sure she got paid handsomely to look like she cares for Schweppes (as she slurps noisily from the bottle) but it is one of the most unconvincing ads I've ever seen in my life. It misses its own punchline, that's how bad it is.
Then there is the George Clooney Nespresso coffee machine. There is one chez nous and let me tell you, it is astonishing. It makes espressos in seconds. Even a fool like me can operate it. They use Clooney and the tagline in English "What Else?" and apparently this is the most popular product in the history of Europe. For mysterious reasons, in the poster someone decided to obscure Clooney's handsome face with a cup (doesn't he look like he could be an espresso himself?). Mind you, he is not holding the cup, as far as I could tell, there just happens to be a cup floating in front of his handsome face.
This is where the French and les Americains differ. The French just adore les movie stars. They could not care less whether they have affairs, or they do drugs or they have pigs as pets. Hence, it's easier for a celebrity to endorse things here.
And last but not least, as we are walking by the river Sunday afternoon, we see an impressive deployment of cops and closed streets and a very eerie calm as if there was a coup d'etat and nobody told us about it. Absolute, chilling calm and then a motorcade. We actually saw the tinted windows behind which sat our darling President Obama. I'm still reeling from the excitement.
Posted by Grande Enchilada at 4:28 PM No comments: Links to this post 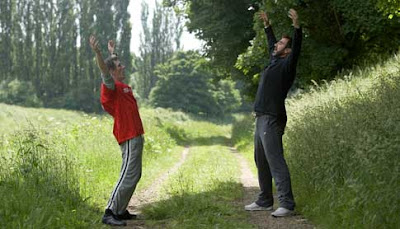 As we plodded through the mess that is Looking for Eric, I remembered why I never see movies by Ken Loach. In contrast to his fellow ham directors who also love a sermon, like Oliver Stone or Spike Lee, he just doesn't have the pizazz or the chutzpah to compensate for the extreme heavyhandedness. Except for a hilarious scene involving group therapy for Mancunian postmen, this comedy falls as flat as soccer star Eric Cantona's boring performance. It's some sort of a working class weepie, soccer romantic comedy with a strong undercurrent of depression. None of those things jell. And I'm still trying to figure out why it got made. As an ad for Manchester United? Because Eric Cantona has too much time and money in his hands? Because half of Europe gave funds to make this film? Why?
Posted by Grande Enchilada at 1:18 PM No comments: Links to this post