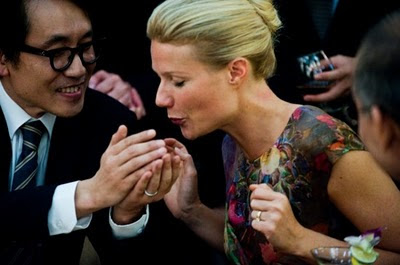 Posted by Grande Enchilada at 2:06 PM 2 comments: Links to this post 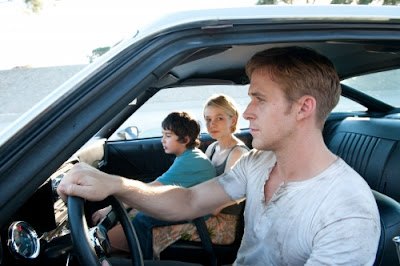 I don't know whether this noirish car chase movie should be taken seriously. There's much in it that has got to be tongue in cheek, although it's hard to tell whether director Nicolas Winding Refn and screenwriter Hossein Amini are dead serious or joking. Either way, if we can't be sure, something's not working. A.O. Scott, in his review, called it "conventional and timid". I would say that it is artificial and antiseptic, despite its ridiculously cartoonish bloodbaths. It feels like a extended music video, polished to within an inch of its life, full of scenes in slow motion with a bubbly 80's soundtrack.
Drive is the story of Driver, (Ryan Gosling) a man with no name, few words, and an inexhaustible reservoir of brutal anger, who does Hollywood stunts for a living and helps with the occasional heist. As much as I love Ryan Gosling, and as good as he can be, he's no Steve McQueen. He's no Clint Eastwood. He's too fresh faced and too expressive to fit the lonely, silent action hero type. At his age, guys like McQueen and Eastwood already looked like they had a lot of mileage. Gosling has good moments in this movie but he is not helped by a director who has no clue about what to do with characters and actors. I can buy the silent dangerous type who decides to redeem himself by falling in love with the single mother of a sweet kid. It's been done to death. But as played by Carey Mulligan, this woman is so beatific you almost expect her to sprout a halo. Turns out her husband (Oscar Isaac) is in jail. So Mother Theresa here seems to have a penchant for troublesome men. Problem is, there is nothing in her character that remotely indicates how or why. It would help if she wasn't this flat fantasy of female benevolence. Give her some sexy, some neurosis, some sense of fear, some danger. I find saintly mothers of cute kids as offensive a female stereotype as whores with hearts of gold, bridezillas and bitchy career women.
Gosling and Mulligan have some chemistry, but Refn deliberately misses the one moment where sparks could fly.  Gosling is driving her around, and she chastely puts her hand on his. We never see their faces. There is no sex at all, except for a kiss in an elevator, which is the best scene in the movie and also the most ridiculously grotesque. These choices may be Refn's commentary about the puritanical pornography of violence in America, but this still does not help us care about the characters.
Drive looks great, sounds great and performs the requisite car chases with cool efficiency, but watching this movie feels like watching the chassis of a very shiny sports car. There is little there, and what little there is, is either too dispassionate, or very discomfiting. I was struck by the fact that if you do the math, in the social-racial arithmetic of this movie, the three "good" characters are white, (Gosling, Mulligan and Bryan Cranston as Gosling's mentor), she is married to a no good Latino, and the meanies happen to be two absolutely horrible Jews (Albert Brooks and Ron Perlman, both expertly chewing the scenery). Feeble lines of dialogue attempt to justify the motivations behind these two execrable people. In the case of Nino, played by Perlman with great panache, he's a wannabe Italian mafioso who bears a grudge because the guidos call him a kike; and Brooks is excellent as a businesslike crook who owns a collection of exquisite blades and knives with which he bleeds people (I assume mostly gentiles) to death. Those he likes, he bleeds more gently, and this is supposed to make him human. I was faintly reminded of medieval blood libels, but perhaps, being of the Jewish persuasion, I'm too sensitive. Still, I can't help but think how these kinds of toxic representations keep bubbling up in the collective unconscious. I'm not saying that there cannot be Jewish gangsters or evil characters in movies, as there are in life, but in a movie with only six characters, two awful Jews is a bit dispiriting, to say the least.
There is a difference between nihilism and empty cool. This movie looks like it wants to be some sort of an existential meditation on the vicious corruption of money, but it is too stylish, too controlled and too basic to really dig for the dirt. The violence is so over the top as to be risible. The characters don't have credible lives. Even if steeped in all the conventions of the genre, which can be quite fun, Drive is pretty lifeless.

The Autobiography of Nicolae Ceaucescu 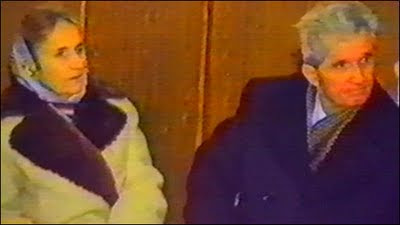 Posted by Grande Enchilada at 12:33 PM No comments: Links to this post 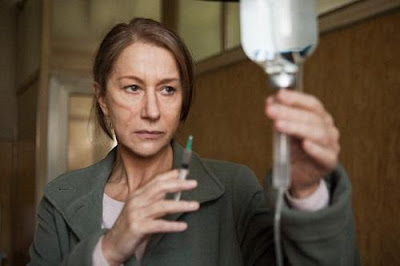 An uneven, unconvincing film by John Madden (Shakespeare in Love) about the story of Mossad agents on a mission to capture a horrible Nazi doctor, The Debt could have been a much more competent movie. As it is, one thinks one is going to see a Mossad caper, only to find out it's an interpersonal spy love drama about truth and lies. I'm curious whether the source material, an original Israeli film, was better at tying everything together.
Many things fail to convince in this film, the casting being first among them. For a convincing Israeli accent in English, the only movie that can serve as reference has got to be Adam Sandler's hilarious Don't Mess With the Zohan. Granted, the Israeli accent is heavily phlegmy, so Helen Mirren, Tom Wilkinson, Jessica Chastain et al, come up with varying degrees of mittel-European that are daintier but not very authentic. Marton Czokas is the one who fares best in the accent and Israeli deportment category.
The Mossad agents are supposed to speak Hebrew among themselves in heavily accented English.  They are on a mission to capture a Mengele-ish Nazi doctor in East Germany and bring him to trial in Israel. They also seem to be the most incompetent Mossad agents in history, because they bungle everything. At one point, the Nazi, (the excellent Jesper Christensen) who has been speaking German to them all the time, switches to English, which must mean he speaks flawless Hebrew. This is extremely confusing, distracting and ridiculous.
People are making much about the fact that Jessica Chastain doesn't look anything like Helen Mirren, who plays Chastain's character later in life. That didn't bother me as much as Sam Worthington, a kid whose stonefaced appeal totally eludes me, becoming Ciaran Hinds, or the very handsome Marton Czokas becoming Tom Wilkinson. I actually thought Chastain and Mirren were quite good as the same person. As good as he is in everything, I just can't see Tom Wilkinson as an Israeli. Furthermore, the movie is so clunky that even he and Mirren, who can usually do no wrong, seem unconvincing.
The actors seem as uncomfortable with the fake accents as they are with the tone deaf, grandstanding dialogue. But it is nice to hear them speak German and Russian (but no Hebrew). The best actor in the movie (and this is becoming some sort of terrible-fabulous cliche, what with Christoph Waltz, Ralph Fiennes and Bruno Ganz being fabulous Nazis in movies) is Christensen, who is chillingly, efficiently and humanly evil.
The gist of the movie, which is that these people lied for years in the service of national healing and of their own job preservation, is very interesting, but it gets lost in the piecemeal handling of personal drama, spy action and history lesson. There is a much smarter, tighter movie buried within the premise of The Debt.
Posted by Grande Enchilada at 11:07 AM No comments: Links to this post