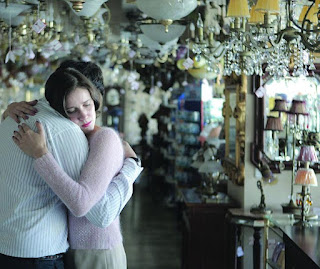 Holy Mother of God. This guy is nuts.
For fans of Giorgos Lanthimos' Dogtooth, his new movie, Alps, is another excursion into extreme weirdness. Experiencing his films is like going into an intellectual version of a creepy amusement park fun house, but even as his movies are philosophical, they don't feel like cerebral exercises. They really involve ideas and emotions, and they are deeply surreal and subversive. Any way that I try to describe what happens in this movie is going to either give you too much information, which you don't want if you want to experience its mysteries, or going to leave you blinking. There is no middle way.
Alps is really is an exploration of how people deal with loss. If I try to recount the plot, it will make no sense to you. But the way it happens is quietly, devastatingly powerful. It is disorienting, shocking, darkly funny and ultimately quite moving.
Lanthimos is the one filmmaker today who creates daring and inventive high concept films about alternative universes of thought set in the most modest circumstances.  He truly explores the dark recesses of human nature, of the way we use language, of the power structures between human beings, and he questions certain givens of human nature, like why accept grief? It's not "I'm going to the future/my memories/the past and I'll be right back".
As I sat, mouth agape, watching Alps, I could imagine some hapless Hollywood producer trying to turn its high concept into a remake with Steve Carell, perish the thought. For Alps is about human grief and a group of people who try to assuage it, in the most literal, insane way possible.
In Dogtooth two parents control their children's lives so much they have to reinvent language to keep the children safe from the outside world and compliant with their power. In Alps, an equally, if not even more disturbing movie, for the first half hour, the audience is as disoriented as in Dogtooth, since Lanthimos and his writing partner, Efthymis Fillipou, would rather die than write one word of exposition. They string tenuously related scenes together, each weirder than the next, making the audience do the work, until at a particular point, it all falls into place with the utterance of just one sentence. It is a testament to their writing skills that they can keep the ball in the air for so long and then make everything clear with just one line. In fact, it is downright scary.
The idea is absurd: Can you substitute the dead? Can you avoid grief? We all know you can't, but this doesn't keep these people from trying.
A rhythmic gymnast trains with a sullen coach. He forces her to do her routine to Carmina Burana, which she hates. She wants to do pop. He says she is not ready for pop. When she quietly complains, the coach gives her a piece of lip so graphic and violent it is both funny and truly shocking. There is only one scene of graphic violence in the film, and it is modest yet quite horrifying, because it both amply foreshadowed and totally unexpected. However, the violence people do to their feelings is constant. As in Dogtooth, language here is subverted. Most lines are delivered without affect. Sometimes people speak in clichés, which devoid of their right context, sound robotic. In a way, this is how grief and mourning feel like. When you are in pain, everything people say sounds hollow, like a bad Hallmark card.
A thread that runs through this film is people's attachment to pop culture, to Hollywood stars as substitutes for real intimacy and emotion. People get close to each other by inquiring about favorite movie stars or pop singers, as if only those bigger than life icons can carry the weight of our emotions.
Alps is, then, about real feelings and fake feelings. In fact, this movie is a comedy about a girl who deals with her feelings and gets what she wants, whereas her friends who can't deal with sadness, don't.
Lanthimos gets away with certain pretentious stylistic flourishes because of his masterful control of tone, a style uniquely his, perverse and savage but not without grace; and his stories, which are like a philosophical Twilight Zone. This said, do not think that his films are boring or too intellectual. They are like unfathomable mysteries with a very dark, deadpan sense of humor that pushes towards the absurd.
Alps should keep you talking for hours on end. If only they would show it in theaters.
Let's hope they will.

Posted by Grande Enchilada at 9:00 AM No comments: Links to this post 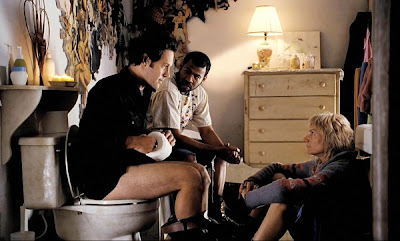 I laughed plenty.
Comedies always get the short end of the stick. They are held to far more exacting standards than the insufferable, weepy, heroic Hollywood fare that gets a pass because it is serious, drecky drivel. This movie, directed by David Wain, produced by Judd Apatow, and written by Wain and Ken Marino, has a very robust renegade spirit that pokes fun at our materialistic obsessions as well as our accompanying fake holistic mishegosses. The movie is slightly undercooked but the bilious sentiments against American consumerism in the form of "microlofts" or McMansions and the equally crazy strain of frenzied organic living is bracing and dark enough to give this zany film my seal of approval.
Wanderlust is the fish out of water story of two driven Manhattanites, George and Linda, played by Paul Rudd and Jennifer Aniston, who can't afford to live in Christopher Street anymore and end up in some sort of hippie commune.
Linda is a documentarian dealing with testicular cancer in penguins. Her rejection scene at HBO smacks of a writer's real bitterness at the finicky demands of American entertainment conglomerates. George works at a firm where the boss is taken out in handcuffs (as if!). They are soon unable to make ends meet.
So they go to Atlanta (shorthand for hell) to his brother's McMansion. This is where the writers let their bile flourish against pretty much everything that is wrong with this country. The brother (Ken Marino) is a horrifying racist boor and the wife (Michaela Watkins, spectacular) is deeply miserable, almost to the point of spousal abuse, so she has a Margarita machine and uses it with the same zeal some people use juicers. The house itself is a riot of bad taste and too many enormous flat screen TVs. The art direction is priceless.
Running away from family, George and Linda end up at a hippie commune full of inspired bit players, including a very funny, relaxed and spot-on Alan Alda as the grand old hippie who runs around in a motorized wheelchair. Justin Theroux, (yes, dear readers, I paid close attention to his scenes with Aniston, and the spark seemed to be there allright), plays Seth, the commune's leader. He does all kinds of crazy things with his mind's energy but looks uncannily like Charles Manson, and is almost as creepy. Theroux plays it straight so he's quite funny. Malin Ackerman, Kerry Kinney (from that show I love, Reno 911) Kathryn Hahn and Lauren Ambrose and are all fantastic as women in various degrees of hippie oblivion.
I adore Paul Rudd, who in this film has a terribly filthy moment in front of a mirror where he is brave and hilarious. Just as he is effortlessly funny, charming, handsome and perfect, Jennifer Aniston tries really hard to relax, but she just can't. Linda is supposed to be uptight, but Aniston is too tightly wound and uncomfortably self-conscious. She looks pinched at all times, even when her character finally relaxes into the hippie life. I don't dislike her, but her internal drama, whatever it is, is very distracting. That woman needs a massage or a toke or something.
The movie has some very inspired bits and others that fall flat, but I really loved how dark and satirical it is. It's about hypocrites on both sides of the divide, and I really welcome a healthy distrust of the holistic, yogic, karmic, tantric madness that is running rampant (and is as marketed to death) in this country.
Comedy pushes boundaries and if it does so, it should do it with panache. The more obvious bits where the filmmakers go through the motions of pushing it (perhaps unaware that they are far more radical with their more subtle stuff) are a nudist guy whose dick hangs out for all to see, and a completely bizarre and misdirected stampede of old and sagging nudists that in order to really work, requires far more verve than that displayed by the director and the editor, who seem to have lost their nerve staging it. That bit really lacks the skill of the rest of the movie, but Wanderlust gets brownie points for trying. It's the influence of Borat's nude wrestling scene, I suspect, except that Sasha Baron Cohen is truly fearless.

Posted by Grande Enchilada at 3:32 PM No comments: Links to this post