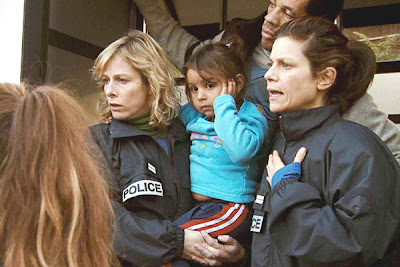 This winner of last year's Jury Prize at Cannes is probably the most comprehensive, honest movie about child abuse ever made. Co-written and directed by female filmmaker Maïwenn, it is based on true stories from the Child Protective Services Unit of the Paris police. It is a fluid, tough, funny, intimate, extremely well made ensemble piece about a group of committed men and women who intervene to protect kids from all kinds of abuse. It is also the farthest you are ever going to travel from the sanitized heroics of American TV shows like Special Victims Unit. The blunt honesty of Polisse is unthinkable in the US. I can't even picture HBO doing it, although I can picture them trying.
If Polisse sounds sordid, it is not. It is tough as nails, and also funny, gripping, entertaining and smart. It deftly weaves the professional exploits of the unit's members with their personal stories. It shows them in action and at rest. They are really a tight clique and their work is so tough, that although they are all heroic, they are also prone to outbursts, violence, substance abuse, arrogance, insolence and all kinds of emotional ups and downs. Maïwenn -- who appears as a photographer documenting the unit's daily work -- and her actors achieve a degree of camaraderie and spontaneity that feels almost documentary. It is the best ensemble acting I have seen in a long time.
The police are blunt, sarcastic, outraged and self-righteous. They have complicated love lives and are used to screaming at their bosses with impunity. Even if it is acted and scripted, the movie sets up realistically, without any exposition, how each one of the cops deals with the aftermath of each case. For instance, the chief upstairs allows one of his underlings to throw a violent fit in his office, because the boss refuses to make a special phone call to find a shelter for a homeless African woman and her boy. There are no grandiose speeches; as the cases pile up, one instinctively understands that these cops are given a lot of slack because of their line of work.
Every scene that deals with the abuse and exploitation of children is intense, but not overwrought. The kids are incredible. But the scene of this African woman and her kid will tear your heart to shreds. Still, Polisse is not a conventionally sentimental movie. It has many moments of grace and visceral power. If at times it threatens to veer into sentimentality, it is more around the private lives of the cops, than around the children's issues, which it treats with astounding lucidity. Polisse is also a vast microcosm of life in France. Child abuse is one instance of human activity that transcends social class. So it's a wide scope of human degradation, from Gypsy encampments, to coddled rich assholes with connections, to clueless teenagers, to working class monsters, to junkies, to even a confused pedophile who is devastated by the harm he causes but cannot help it. There is nothing black and white in this film. The movie refrains from judging, and it portrays the offenders as the human beings they are, but the cops are the avenging angels and they tend to let their anger loose in a way that is cathartic for the audience. There is a fantastic scene in which a French Arab policewoman confronts a Muslim man, an Imam perhaps, who intends to give his underage daughter in marriage to someone somewhere. This is against French law. The scene is not about the law, it turns out, but about the contempt the man shows for the policewoman. It starts in French but soon he tells her in Arabic she should be married and ashamed of herself. She rips him apart and this female cop loses it. Years of her own history with her parents, her culture, the difficulty of being of her culture in a place like France, her pride and shame and everything she's had to go through to get to where she is, all of it explodes in a magnificent outburst. It encompasses France's recent history of unresolved culture clashes in a couple of minutes. In another remarkable scene the detectives make fun, somehow deservedly, of a teenager as they interview her. She is an idiot and they are cruel to her, and there is no real attempt to justify them. They are tough, worn out and sometimes jaded, but they are also passionate and consumed by their work.
The actors are all miraculous. Polisse is reminiscent of that other French social realistic marvel, The Class.  It is a remarkably luminous film about human darkness.
Posted by Grande Enchilada at 9:00 AM 1 comment: Links to this post 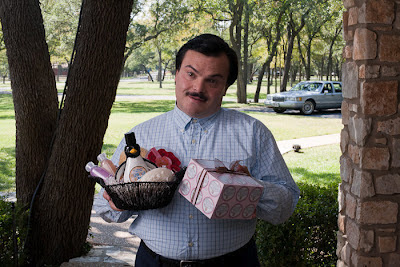 Posted by Grande Enchilada at 11:13 AM No comments: Links to this post 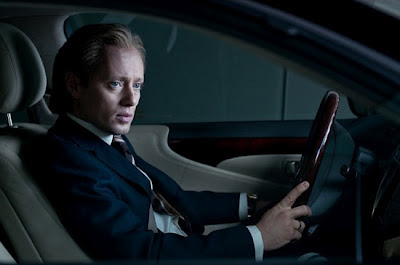 The most thrilling movie currently showing at theaters is this exhilarating, brazen Norwegian thriller, based on a novel by Jo Nesbø. Outrageously over the top but in complete command of pacing, plot and story, Headhunters is a masterful thriller. I would be surprised if the rights have not been bought yet for an American remake. I will be surprised if the remake retains what makes this film so compelling: it is driven by a most charming anti-hero. At least he already comes with an Anglo name. Roger Brown (one suspects this is not his real name), is a headhunter at a top executive search company. But he is short, and not very handsome (he certainly seems more attractive as the movie goes along). He is married to a gorgeous woman who towers over him, and he is convinced, in his massive insecurity, that she only wants him for his money. Hence, to retain her and the status she gives him, he gives her a lavish lifestyle he can't possibly afford, which makes him steal art masterpieces in order to pay the bills. Roger is all about arrogance, which is the default mask for insecurity.
To him, it's all about how he appears to others, and boy does he overcompensate.
Aksel Hennie, the extraordinary actor who plays Roger, is a complete discovery. Roger is a skillful, cocky prick. In a rare instance of actually welcome voice over narration, he explains how to rob fine art successfully and why he is who he is. In short, he's short, but what he lacks in stature, he has in spades in spunk. He is always on in public, a mini alpha male, too proud of his ridiculous head of hair, a blond James Brown coif, he is horrible to his mousy, clingy lover, horrible to prospects at job interviews, a nasty piece of work. But we also see the true side of him. He walks into a room already factoring in who's smarter, taller, more handsome than him (most everybody), and the fact that he allows us to see who he really is makes him utterly endearing. This is what makes the movie exciting. It is about a despicable character you end up loving.
It's already suspenseful fun to watch him do his job at stealing art with great precision and panache. But then, the noose around his neck gets tighter: the police are sniffing around, he owes zillions of krone in debt, the wife seems to be looking for attention elsewhere and he realizes someone very dangerous is out to get him. He is put through a series of can you beat this plot twists that are so over the top you can barely believe you are still buying the premise, but you are, on the strength that everything has been meticulously set up and that Roger will do anything to survive. At first it seems that he will do anything to not get caught and be unmasked for the fraud he is, but as he gets literally stripped to the core of his being, he understands  what is really important, and manages to change dramatically, while still being his mischievous, manipulative self.  I have rarely seen an actor deliver such a rounded, brilliant performance. You root for Roger, because he is brazen, and he is brave and takes on the wrath of the gods by being who he is.
Director Morten Tyldum delivers a perfect thriller. The pacing is fast but always clear,  everything works like a charm without feeling mechanical, the movie has amazing swing. The super contrived, fun plot is always driven by character and by the end you almost want to stand up and cheer for awful, arrogant, short, bug eyed Roger Brown, a most unlikely hero. If you want to spend two really fun, exciting hours at the movies, this is the one you should see.
Posted by Grande Enchilada at 12:24 PM No comments: Links to this post

Sound of My Voice 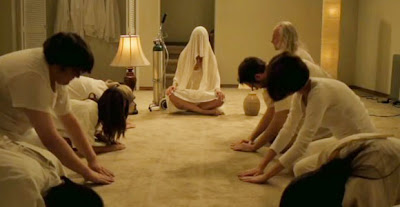 More icky and creepily atmospheric than suspenseful, Sound Of My Voice is an fitfully interesting, if under-delivered trip into the recesses of a crazy cult in Los Angeles, led by Maggie, a beautiful, charismatic woman (Brit Marling, who wrote and directed with Zal Batmanglij), who claims to come from the future.
A young couple, he is a journalist and she is a reformed Hollywood producer's spawn, infiltrate the cult to try to expose it. As is to be expected, the skeptic ends up being more vulnerable to the con than his more open girlfriend.
The material about the cult, and how this woman, Maggie, manipulates her acolytes is quite fascinating. Marling gives a quiet, eerie performance, using the hushed, phony-sacred tones of the most annoying yoga teachers, to purge her followers of their own free will. The cult dynamics feel quite authentic, and every time we're in her compound, a pedestrian basement in a generic suburban home -- that is, a wall-to-wall carpeting creep fest -- the movie is mesmerizing. The problem is in the protagonists, played by Christopher Denham and Nicole Vicious, two weak, uncharismatic actors with little chemistry or chops. Maggie's storyline seems to have been given much more attention by the filmmakers, but the couple ends up taking most of the screen time and their dialogue sounds amateurish and undercooked in contrast. Lots of opportunities are wasted to explore their relationship, and it is rather puzzling that their conflict is avoided, instead of being exploited for maximum drama and suspense.
Some of the plotting is clunky and the pacing is too slow for a movie that promises to be suspenseful. I can understand why the scenes at the cult are shot in real time, to enhance the oppressive isolation of those in the basement; but they go on too long and the tension in the movie fizzles out. The final ironic twist was another disappointment. A good final ironic twist should deepen and illuminate, confound expectations in a felicitous way, but this one feels just lame, particularly when the movie makes clear that Maggie is a fraud. In the hands of more canny directors, the ending could have been a nail biter, but it falls totally flat. Still, there is a lot that is interesting in Sound of My Voice, particularly the stubbornly uncommercial yen to explore dark corners in sunny places, and the strong, impressive presence of Brit Marling, a promising new actress.
Posted by Grande Enchilada at 2:00 PM 1 comment: Links to this post