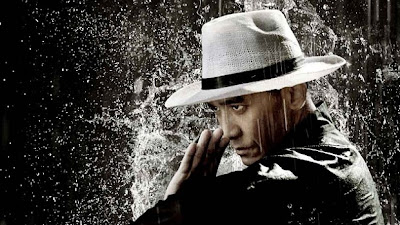 I may be the only person in the world who does not like Wong Kar Wai's In The Mood For Love. I like seeing it. I like being mesmerized by Christopher Doyle's cinematography and by those amazing silk dresses on Maggie Cheung's body, and I dream of eating noodles in that steamy joint on the corner, but all that aesthetic refinement, all that excruciating longing seems too deliberate and artificial, and it bores me.
Feel free to sue me.
The idea that a stylist like Wong Kar Wai can execute a beautiful martial arts film sounds great on paper, and The Grandmaster has some gorgeous scenes, but, even aesthetically, it disappoints. Wong's stylistic choices are puzzling. Martial art movements are like ballet. Fights are choreographed. As in dance, you want to see the whole movement, the entire bodies in motion (think of Fred Astaire: full frame), you want to understand the physical sequence and geography of the fights; but the director chops up most of the action into pretty close ups of sliding feet and chopping hands and he uses a blurry slow motion that muddles the action. The editing is frustrating. When people are not fighting, the camera never sticks around long enough to let us drink in the beauty of the frames. Phillippe Le Sourd's cinematography is at times ravishing and at times tacky. And the storytelling is choppy and stilted. At the beginning, the movie looks like a graphic novel; you can clearly see the storyboards. Then either one gets used to it, or it relaxes, paradoxically, into a slow movie with choppy cuts, both epic and intimate.
As for the story, it is all over the place. The hero is Ip Man (the unflappable Tony Leung, a dead ringer, at times, for Barack Obama), and he is at the center of a contest between the martial arts schools of the south and of the north of China at the time of the Japanese invasion in the 1930s. Ip Man trains to duke it out with his northern rival and this is a pretext to give us all a crash course on the different schools and styles of martial arts, from kung fu to tai chi. Some of this is fascinating, as Chinese martial arts have this wonderfully cryptic philosophical bent. Which -- sidebar -- led me to ponder that our current warmongers could use a bit of the Chinese element of surprise, instead of announcing to the world that they are going to war any minute now. Perhaps Obama and his fellow gung-hoers should watch this film; they might learn something about smart strategy.
Kung fu aside, this being a Wong Kar Wai film, The Grandmaster is really a movie about longing, as are all his films. The longing in question is between Ip Man and the daughter of his northern nemesis, the gorgeously steely Zhang Ziyi, who is a martial arts whiz herself. They have a wonderful fight, falling in love as they try to kill each other, but they can't be together. None of this quite jells, but somehow the movie's stilted rhythms have a mesmerizing effect, a trance-like quality. Some of it is reminiscent of old-fashioned martial art films, with exaggerated, theatrical acting.
Ip Man's story is told like a legend, even though he is a real character of the modern era, which is very cool, a continuation of the legacy of martial arts culture almost to this day, but because Wong is interested more in the idea of longing, The Grandmaster is, like all his films, heroically, even perversely anticlimactic.

Posted by Grande Enchilada at 9:27 AM 8 comments: Links to this post