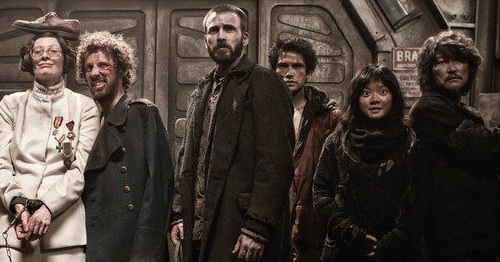 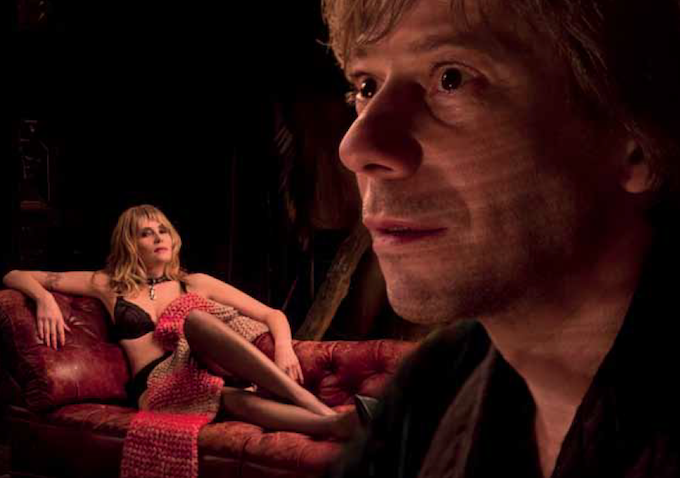 Roman Polanski brings David Ives' hit play to the screen. The movie stars Polanski's doppelganger Mathieu Amalric, as Thomas, a playwright who is auditioning actresses, and his wife Emmanuelle Seigner, as Vanda, a ditzy actress who walks in from the rain and then turns out to be a human bag of tricks, and then some.
The playwright and the actress weave in and out of the text of the play they are working with, something called Venus in Fur, which is an adaptation of a novel by Sacher-Masoch, the guy who lent his last name to masochism. So we are watching a movie, adapted from a play that has a play in it that is adapted from a novel.
Visually, Polanski helps the Chinese boxes conceit by making it clear we are entering a symbolic theater. The opening scene is a lovely tracking shot in a stormy night in a Parisian boulevard that suddenly veers into a little theater, where several doors open (like in the opening credits of Get Smart) until we reach Thomas, who is on the phone berating all the idiot actresses he has auditioned so far. In comes this Vanda, acting like a ditz, but somehow convincing him to let her read. She is vulgar and seemingly out of her depth, and completely wrong for the role of a repressed 19th century woman, but when she reads the lines, she transforms into the character, who also happens to be named Vanda.
Emmanuelle Seigner is a formidable beauty, but she is not the actress that the role requires. She is entertaining, but lacks nuance. And it pains me to say this, but this is an instance where the role is better suited to a younger woman. Perhaps a better actress (say a Juliette Binoche) would better convey that mercurial quality of Vanda's that seems forced in Seigner.
Amalric, however, is a great actor, and he is fantastic as this man who thinks he calls the shots and whom this mysterious woman eventually unravels.
When I saw the very entertaining play on Broadway, I did not quite understand what the point was. The woman who starts as a ditz ends up being far smarter, and she needs to deploy all her female arsenal of tricks to get where she wants to, from coyness, playing stupid, being ravishingly beautiful, turning out to be extremely smart, etc, but to what end? To effect some sort of gender revenge on the hapless guy? Is that it? Polanski helps clarify the metaphor by going symbolic full force, something that he can do with cinematic tools. The same could have happened onstage, change the lighting, make her final assault a coup de theatre, but it didn't and it was confusing. Here it is clearer, although I'm not sure, if I understand this play correctly, that women want to emasculate men, even if they have good reason sometimes.
This is a small movie with two actors on a stage, but thanks to Polanski's command of his craft, it does not feel like filmed theater. It feels like a movie and it makes the Broadway staging seem poor and pedestrian in comparison. It is gorgeously framed and cut, it flows beautifully.  When the actors mime pretending to use props, Polanski adds the sound effects of a spoon tinkling against an invisible cup or the swoosh of a whip, and it works like magic. This gives an added layer to the play within the play, to the idea that theater is both magical and it is a game. Polanski really knows what to do with the language and the tools of cinema. This is why I love him.
Too bad that the bombastic score by Alexandre Desplat, a mix of carnival and Greek music, unbalances the subtlety of Polanski's visual approach. The end also builds into the almost grotesque. Of course, these choices are all Polanski's. His biggest choice is to have decided to make this particular story of gender war into a film. It is not a coincidence that Thomas has a last name that rhymes with Polanski, that Amalric looks like him and that Vanda is played by his actual wife. Polanski has always had a macabre sense of humor and, given his notorious past, I'm still trying to figure out what he is trying to say with this one. In a scene where Vanda protests that the play is abusive towards women, Thomas is outraged, finally claiming that not everything is abuse and that things are complicated. Indeed.
Posted by Grande Enchilada at 11:48 AM No comments: Links to this post 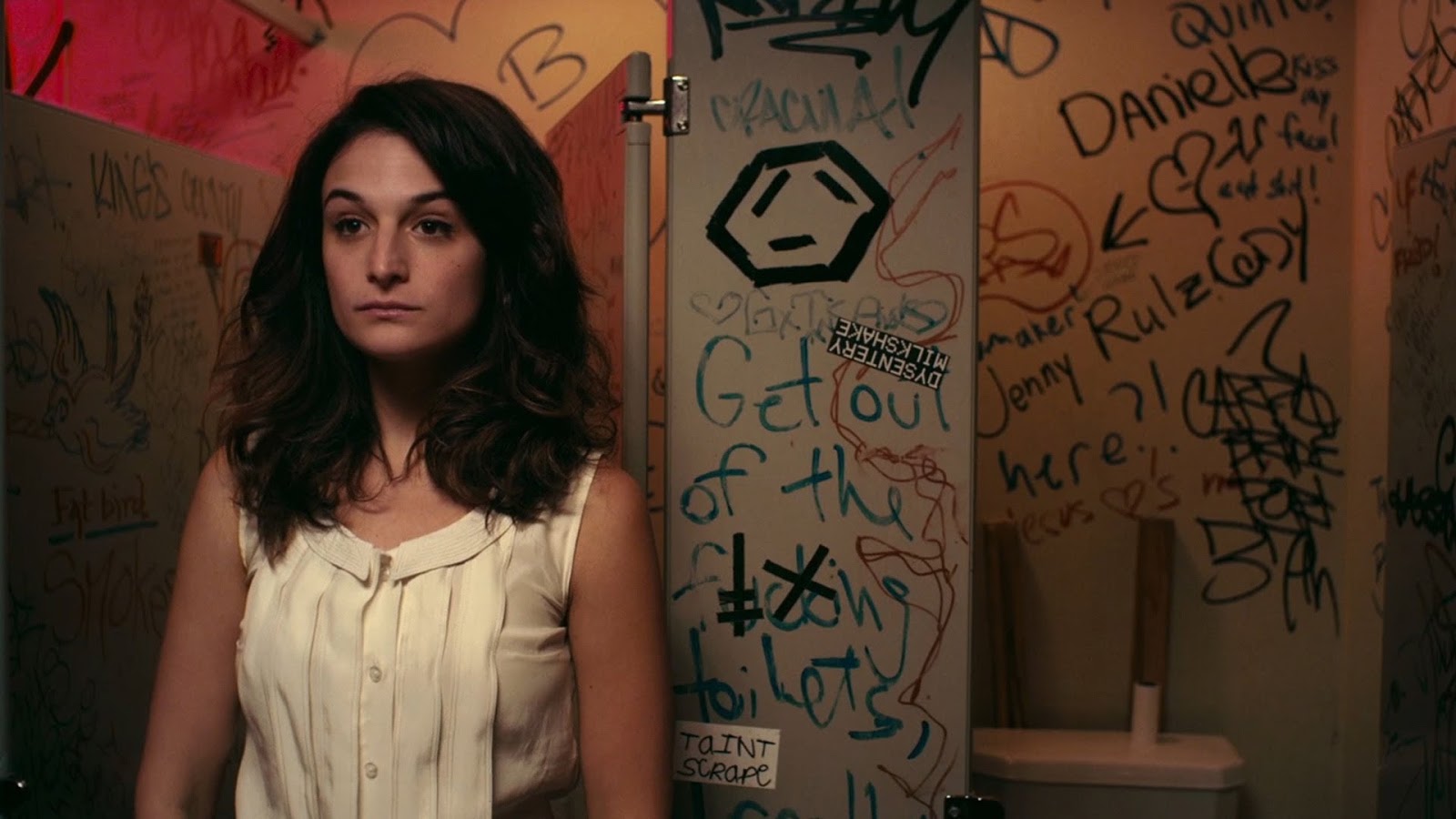 This quietly radical romantic comedy by Gillian Robespierre presents the story of Donna Stern, a struggling stand up comedian (the wonderful Jenny Slate), who gets pregnant in a night of drunken passion. She decides to get an abortion. Because she is a comedian, she makes jokes about the most private and painful areas of her life, and abortion is included. This does not mean that she is not devastated and consumed with worry by the news, but it is not a question of morality. It is her body, her future, her reality, her choice. Period. This is what is radical: there is no judgment. There is no preaching, one way or another. She made a stupid mistake and now she has to deal with the consequences, but in a state, like New York, where abortion is safe and available to women, she doesn't have to deal with the added cruelty of abortion being illegal. A quietly powerful scene at the clinic, where she is reminded of her options, serves to remind her and us that no one takes this decision lightly.
The trailer for this movie makes it look much less funny than it is. Robespierre manages to balance the saltiness of Donna's comedy with great empathy for her plight and a charming, sweet streak of romance. The characters are endearing and the cast is uniformly wonderful. This comedy flows organically as a fully developed story, instead of a series of disconnected set pieces, and this is very welcome. Obvious Child is a mature, grounded, poignant and funny comedy about abortion, which is no mean feat.
Posted by Grande Enchilada at 10:35 AM No comments: Links to this post