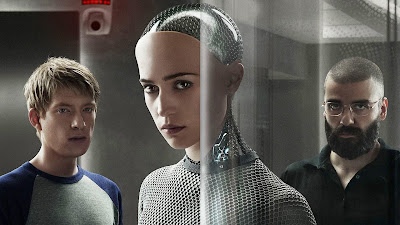 A creepy science fiction film by screenwriter Alex Garland, Ex-Machina worries about the terrifying notion of man creating artificial intelligence capable of consciousness. This is a fear as old as time, told by storytellers in tales featuring man-made creatures from The Golem, to Frankenstein, to passive-aggressive Hal 2000.
Now Alicia Vikander plays Ava, a sultry robot who looks half human, half hardware. Oscar Isaac plays Nathan, her creator, an ornery, drunk Silicon Valley grade A asshole whose version of playing God is not only creating consciousness in a robot, but also messing with other people's heads, among other self-involved pursuits we discover later. Caleb (Domnhall Gleeson), a brilliant nerd employee, is invited to Nathan's secluded compound to perform a test on Ava to determine if she exhibits human consciousness. What follows is a satisfying brain riddle, with Caleb developing a crush on the very lovely, transparently human Ava, and Ava playing games with his poor heart and mind, while an out of control Nathan thinks he controls things.
Luckily, Garland is interested in the sterile yet febrile atmosphere that surrounds Nathan, and in the mind games robots and their makers play. He is interested in the discomfort created by the balance of power of artificial consciousness in interaction with humans, let alone the God complex that comes with it, and if indeed conscious, the almost inevitable rebellion of the created against their creator.
Slowly and delightfully, the movie turns into a quiet horror flick that hints at the disturbing possibilities of a creature like Ava unleashed into the world. She doesn't care about ruling the universe, but she has been created with only self-interest at heart. She is, after all, her father's daughter. Garland's hall of mirrors script and his poise as a director examine our capacity for invention and the uses we put to it with an unsentimental, refreshingly non-preachy eye. He is not an optimist. (I hate optimists).
If creepy sci-fi with a side of sang froid is not your cup of tea, watch this movie for the work of the three wonderful actors, and in particular for a scene where Oscar Isaac gets his groove on. A quietly controlled actor with an angelical face, he tends to play men with a cold, driven side, (A Most Violent Year, The Two Faces Of January) or rueful misanthropes (Inside Llewyn Davis). He is the best thing in the movie, although Vikander does a splendid job of acting like a robot acting like a human, never an easy feat. For a robot passing as human, she is subtly alluring. Her allure is not studied, and hence makes it possible to believe that Caleb, or any other man, would succumb to her unspoiled charms.

P.S: For a comparable acting tour de force, you can endure Ridley Scott's uneven, all over the place Alien prequel, Prometheus, in which an excellent Michael Fassbender portrays a robot who likes to imitate Peter O'Toole in Lawrence of Arabia.
Posted by Grande Enchilada at 10:00 AM No comments: Links to this post 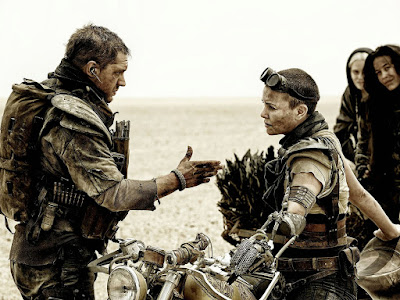 Feminist, shmeminist: It's how movies should be. Period.
Anthony Lane nails it in his review.
Posted by Grande Enchilada at 10:55 AM No comments: Links to this post 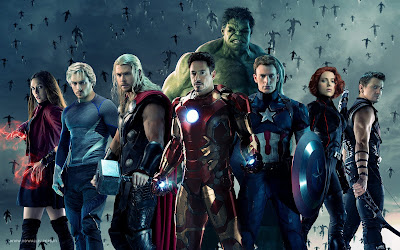 A quarter of a billion dollar piece of crap. Here's my review.
Posted by Grande Enchilada at 11:48 AM No comments: Links to this post