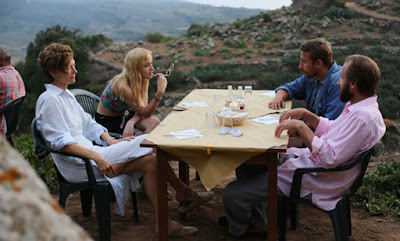 A bigger cast could not have made me happier: Tilda Swinton, Matthias Schoenaerts, Dakota Johnson and Ralph Fiennes, stuck in an arid and steamy Italian island having rich white famous people problems. Apparently, fame is a bitch, so they are morose, ex-suicidal, bored out of their wits, or manically orchestrating fun.
I was not a fan of director Luca Guadagnino's stylish melodrama I Am Love, also with La Swinton, but this one I found more delectable, in the way that sea urchin is delectable: salty, sweaty, messy, sexy, with the longueur of an interminable hot summer afternoon in crumbling Europe. Decadence is so much fun, yet it is rarely found on movie screens nowadays. I thoroughly enjoyed this movie, mostly for this reason, and because the four stars are such pros, it's a joy to watch them bask like lizards in the sun, all rotting inside, each one in their own way.
Tilda Swinton plays a rock star called Marianne, who is recovering from her lost voice with Paul, her beau and minder (Matthias Schoenaerts, the man who makes my knees, my heart and my soul quiver).  They make love, he takes care of her. It's Edenic, except that it is also sexy. All is good until her old flame shows up in the shape of Ralph Fiennes as Harry Hawkes, a devilish music producer, a manic louche with energy long past his impending expiration date, and his stunner of a newfound daughter Penelope, the sexy Dakota Johnson (who saved Fifty Shades Of Gray with her sense of humor).
Guadagnino is really good with atmosphere, and in particular, with the texture of the lives of spoiled people. You can tell his actors know this feeling in their bones. They lounge and laze about, colonizing the traditional island with their obnoxious fabulosity, Marianne wearing elegant nun-like clothes by Dior, Harry commandeering a little bar with karaoke, all of them appropriating the space around them with their extraordinary privilege.
I have seen most of Ralph Fiennes's movies, except for the ghastly Harry Potter series. He has never played a character like this before. He may not have been the first candidate to come to mind (I'm thinking Gary Oldman, less elegant; more rock & roll), but he makes up for it with an unsettling combination of desperate mischief and an equally desperate darkness that blossoms in Harry's rare moments of stillness. He is a middle-aged imp and the nonchalant way in which he disrupts people is careless, needy, and selfish. Yet, in the few moments where he settles down, he looks lost and devastated. He is utterly superficial, but he causes deep trouble. He is also not as bad as he could be. Penelope is worse. A quiet, lethal monster of self-involvement.
The whole thing is an unsavory menage a quatre, made particularly icky by Harry's inappropriate ways around Penelope. A backstory about how Harry basically ceded Marianne to Paul as if she were property to inherit compounds the incestuousness of it all.
At first, we think the movie is about Marianne, then we think it is about Harry. The four get a flimsy chance to show whatever ails them, but the movie is really about the obliviousness, the clubbiness and the sharp instinct for self-preservation of those who have it all.
Guadagnino spends three-fourths of the movie leisurely setting up the characters and their relationships, and one just sits there in the blazing sun waiting for things to disintegrate, which I found delightful. He subtly involves Italy around the edges with tales of immigrants dying to arrive at its shores; old-school, sleepy, provincial, Catholic Italy dealing with a harsh world by digging in its heels by tradition and exclusion. At the very end, bad things happen, not always credibly, but somehow powerfully.  Dark fun in the sun.

Posted by Grande Enchilada at 10:00 AM No comments: Links to this post 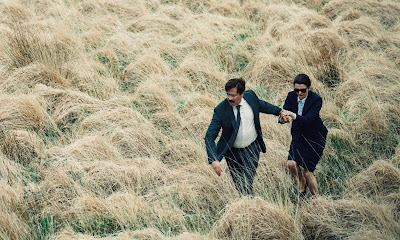 I am a big fan of Greek director Yorgos Lanthimos. Before he made the more expensive The Lobster, Lanthimos delivered elegant, deeply unsettling high-concept movies with very modest budgets (Dogtooth, Alps). You could not stop thinking about these movies. They are like a punch in the gut.
Now that he has a stab at more resources and an English-speaking cast, I'm sad to report the result is disappointing. It's not that he has sold out. The Lobster is still too hermetic and independent to be commercial, but it lacks the sharp brilliance of his other two films.
Still, it is far more original than most movies. Set in a dystopian world in which people who are not part of a couple are persecuted, it follows David, a chubby, miserable architect, (Colin Farrell) who after being dumped by his wife, ends up at a hotel where people go to find a significant other. If they don't succeed, they are relegated to a bizarre fate. Whereas Dogtooth and Alps were fables in which we discovered an alternate reality at odds with people's commonplace surroundings, The Lobster takes place in the near future. Here we are squarely in a sci-fi fantasy world. The shocking contrast between what looks like reality in people's minds and the surreal is lost.
In essence, The Lobster is a one-joke movie that repeats itself way past the punchline. Lanthimos and his writing partner, Efthymis Filipou, imagine the rules of this society in great detail, but the movie remains an intellectual, conceptual game, rather than an emotionally compelling story.
The screenwriters observe how bizarrely we act when we are in love, and take the absurd demands we place on the objects of our affection (or affliction) and they exaggerate our misguided expectations ad absurdum. They magnify our obsession with perfect compatibility to darkly comic results. The problem is that they get stuck defining the myriad rules of this universe and are hamstrung by their constraints. They are so busy setting up this world, and articulating the rules, they lack the imagination to liberate their story from them. And so, if the first third of the movie is exhilarating in its originality, the rest is explanation and repetition. Some of the rules seem arbitrary, some are forgotten along the way, and some seem unnecessary. Lanthimos has always had a knack for shocking, controlled violence, but here he uses it more liberally, and the shock is more vulgar. The movie is heavy-handed and literal and the late onset love story which is supposed to move us seems trite and puny.
The Lobster is strangely lifeless. Still, it is gorgeously shot, it has a powerful classical music soundtrack, and it has the wonderful Rachel Weisz and Lanthimos' usual collaborator Ariane Labed, who bring as much life as they can to the forced tableaux. Colin Farrell does his best to disappear but brings no nuance to his role. Ben Whishaw is sharper, and the great John C. Reilly is wasted. The movie has flashes of beauty and brilliance, and a cool ending which neatly ties up the giant metaphor we've been watching for two long hours. But is this what happens when money comes knocking?
Say it isn't so.

Posted by Grande Enchilada at 9:25 AM No comments: Links to this post