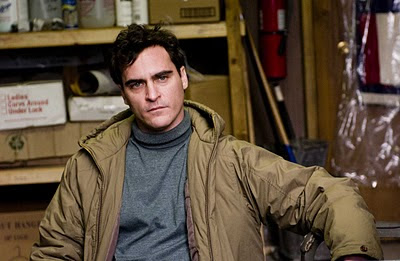 Two Lovers, with budding rapper and potentially mentally deranged ex-actor Joaquin Phoenix: Was surprised that Gwyneth Paltrow was good in it, and so was Vinessa Shaw and I like the movies of James Gray. The movie is appealing as you sit there, but doesn't hold up as well after. Still, good acting, great, moody texture all around. I applaud James Gray for sticking to Brighton Beach and making American films that don't feel American but they are. 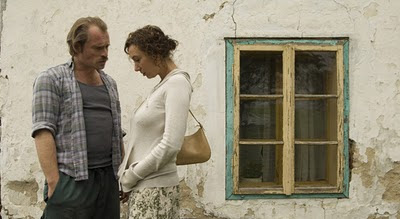 Revanche, which was nominated for an Oscar this year, is a neat Austrian film noir. As film noirs go, the story is great but the movie is shot with such clinical detachment, I couldn't really get worked up over it. I bet there will be an American mauling of this film soon. It has a great plot.
Posted by Grande Enchilada at 2:05 PM No comments: Links to this post 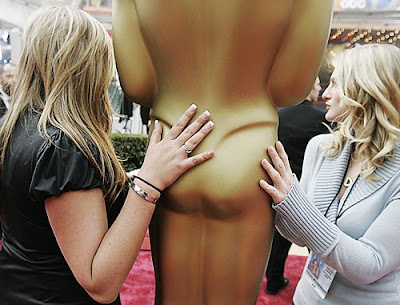 Loved the David Rockwell set: Fabulous. Everything else, pretty much cringe inducing and mindnumbingly boring as usual. Hugh Jackman is adorable, but the jokes were nasty and stale. Who wrote that crap?

Loved Anne Hathaway singing. What a good, lovely sport. I'm still waiting for the day when someone will finally kill the musical numbers. They were a disaster.
Loathed the musical number. I hate Moulin Rouge, by the way.

Loved the screenwriting device where they showed a page from the script with the actual shots of the movie. That was supercool.

Loved the Judd Apatow short with James Franco and Seth Rogen. It was hilarious they laughed all through The Reader.

Hated that there were no clips of the nominated actors. That sucks.

Hated that there were not enough presenters. Why get stuck with Sarah Jessica Parker and James Bond for three hours? We want to see the stars. Loved Tina Fey and Steve Martin.

We can't decide whether having 5 past nominees gang up on the nominees was tacky, creepy, cool or all of the above. It was most decidedly creepy, as if they all become a fraternity of zombies or a cult or something.

Loved that Penelope Cruz won. She was a class act. But where was Javi?

Hated the best supporting actor going to Heath Ledger. It's not moving. It's tacky. For a moment I thought we were attending the funeral service. The words of one relative would have sufficed. I don't care if you hate me.

Loved that Mickey Rourke's "poor pitiful me" campaign backfired. He could have won. And would have totally deserved it.

Loved that Sean Penn won. Loved that he hectored people. Loved that he thanked Mickey Rourke instead of his wife. I just love that he is such a genuine asshole, great fucking actor.

Loved that Milk won best screenplay -- although it should have been Happy Go Lucky.
But Hollywood was trying to stick it back to California.
Loved the gay mormon guy. That'll show them. It was the night of the gays.

What the fuck with best foreign film? What a disgrace. I have nothing against the Japanese movie that nobody, including those who voted for it, saw. But that neither The Class, which is the best movie of the year, period, or Waltz with Bashir won is absurd, inexplicable and pathetic. It's about time someone reforms the foreign film category. It's an embarrassing disgrace.

Loved that the animated short that won was line animation, for a change.

Liked that Man on Wire won. But was rooting for Werner Herzog. Or the Katrina film.
Philippe Petit, ever the show off.

We can concede every prize won by Slumdog Millionaire except Best Movie and Best Adapted Screenplay. They are not by any stretch of the imagination.
Loved the SM kids in their little tuxes. They are so adorable.

My favorite part is always the obits. (Have you noticed that Roy Scheider dies every year?) But poor Queen Latifah, saddled with singing while no one can see her.

Hated that there were not enough audience reaction shots.

A bit flabbergasted by both Jerry Lewis and Sophia Loren. She, poor thing, looks particularly scary.

Maybe they could consider changing the order. I think it is insulting to start out with best supporting actress. Just build it up. Start with the music, cinematography, editing, documentary, whatevs and then end with all actors before giving out best movie.
As always, we wonder why we keep watching every year.
Posted by Grande Enchilada at 6:21 PM No comments: Links to this post

The Nominations or Why do I still care?

I'm rehashing this from last month. Last month nobody cared, but the Oscars happen at the end of this week. So in case anybody's wondering.

I should have learned my lesson years ago. The Oscars are exhausting, futile, boring, banal, infuriating and not worth my typing this. But I can't help it. I drank the Kool-Aid when I was a child, and I have been damaged ever since.
The NY Times has a fun ballot you can fill out. Mine is filled with the people I'm rooting for, not with the disgusting potential winners.
So once again, let me vent:

• Go Richard Jenkins! (The Visitor) -- major underdog and he won't get it but we root for him cause he is the greatest character actor working today. This man can do everything and anything. Loved him in Burn After Reading, as a man hopelessly, heartbreakingly in love with Frances McDormand and adored him in Step Brothers, because he was hilarious.
• Go Mickey Rourke (The Wrestler) -- a heartbreaking, touching, gorgeous performance.
• Go Sean Penn (Milk) -- beautiful, beautiful, beautiful work, but he is disliked, so he may not get it. Or he may, because of Prop 8.
• Frank Langella (Frost/Nixon) - On stage, unbelievable. On screen, very, very good, but I root for the others.
• Brad Pitt (Ben Button) -- here is an instance of a nomination bestowed to someone for enduring hours of make up and motion capture. Because I didn't see Pitt do anything during the three interminable hours of this bombastic, useless film.
I would have picked Josh Brolin for W. He was incredible as 43.

• Josh Brolin (Milk) -- Excellent.
• Robert Downey Jr. (Tropic Thunder) -- Beyond. He should win. It's important that someone doing comedy should win. J'adore Robert Downey Jr.
• Phillip Seymour Hoffman (Doubt) -- He's very good in this film but nothing earthshaking, but I would have gone James Franco for Milk and James Franco for Pineapple Express. But life ain't fair.
• Heath Ledger (The Dark Knight) -- there can't be Oscar night without cringe inducing bullshit like giving prizes to dead people. I fucking hate that.
• Michael Shannon - (Revolutionary Road) -- I thought he was a major hambone.
I would go for his colleague David Harbour in the same film, who plays a man utterly in love with Kate Winslet. He was very impressive.
My bet would have been Eddie Marsan in Happy Go Lucky. And Emile Hirsch in Milk was great too.

I am pissed for the snub of Sally Hawkins for Happy Go Lucky. At least she got her Golden Globe.
• Anne Hathaway (Rachel Getting Married) -- she's getting it and good for her, but nah.
• Meryl Streep (Doubt) -- they should just give her an Oscar every year for existing. She rocks, la cabrona.
• Angelina Jolie (Changeling) -- this has got to be the most calculated ploy to have the two most photographed celebs nominated so people watch the Oscars, cause no one but Katya, Andy and I really gives a shit.
• Go Melissa Leo! She's the Richard Jenkins of this category and a fine, fine actress.
• Kate Winslet (The Reader) -- Didn't see it so don't know. I have not heard anything good about that movie from anyone. We all know she can act. And I'm glad she didn't get it for RR, where I thought she was a bit over the top (although she totally rocked in a few scenes). But I get a feeling this is a Harvey Weinstein party.

• Amy Adams (Doubt) -- I love this girl. She makes innocence real and true.
• Penelope Cruz (Vicky Cristina Barcelona) -- funny, furious and fabulous. Totally deserved. Rooting for her.
• Marisa Tomei (The Wrestler) -- She's getting it for displaying gynormous balls and good for her.
• Viola Davis (Doubt) -- I must be the only person in the universe that feels that she was a bit hammy. The snot coming of her nose distracted me to no end.
• Taraji P. Henson (Ben Button) -- apparently we are not tired yet of angelical, saintly Black women.

If I were Darren Aronofsky, I'd be pissed. Because there are people here that deserve this prize much less than him. The Wrestler, which is not a perfect movie, but has more life and pain and grit than anything we've seen in a long time.
• David Fincher (Ben Button) -- I fail to see the hype. This movie is a giant missed opportunity.
• Ron Howard (Frost/Nixon) -- Perfectly decent work. Efficient, clean, and better than expected.
• Gus Van Sant (Milk) -- Nice job. But for some reason, I am underwhelmed. However, given the slim pickings, this is my favorite.
• Danny Boyle (Slumdog Millionaire) -- I detest this movie. But there is something to be said for Danny Boyle's energy. It will be him.
• Stephen Daldry (The Reader) -- Another Harvey Weinstein party. Haven't seen it, so can't judge.
But the directing category this year is horribly poor.
The absence of Mike Leigh is unforgiveable.

I am so happy to see that both Werner Herzog (Encounters at the End of the World) and Man on Wire made it to the list. I love them both. Trouble the Water, the film about Katrina is also astounding.

Two of the very best films this year are here: The Class and Waltz with Bashir. They are better than anything that is in the local running. I'm torn between the two, but I think The Class is more rounded.
I'm betting it will be Waltz with Bashir, though, if the alteh cackers who vote can sit through serious animation.
Gomorrah, The Headless Woman and Hunger should be here, but that would be too much to expect.

Very underwhelming all around, but I'm rooting, pointlessly, for Milk. And after Milk, Frost/Nixon.
Happy Go Lucky and The Wrestler should be here.
Posted by Grande Enchilada at 7:52 PM No comments: Links to this post