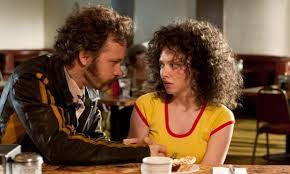 Amanda Seyfried acts her heart out in this unconvincing, uninspired movie about Linda Lovelace, the star of Deep Throat, the most successful porn movie ever. Even though the film has a great cast, led by Seyfried and a spectacularly creepy Peter Sarsgaard, this woman remains a blank. And it is not Seyfried's fault. The movie, directed by Rob Epstein and Jeffrey Friedman, and written by Andy Bellin, starts buoyantly enough as Lovelace meets Chuck Traynor, a sleazebag you can spot 10 miles away. She's 21 but lives cloistered with her strict parents, (Sharon Stone, good in a distracting wig, and Robert Patrick, excellent) and seems to be a virginal little angel. At first all is great fun as Traynor seduces her with promises of stardom. Even her parents are impressed with him, although you want to take a shower just from looking in his direction. He teaches her the notorious ropes that gained her instant fame: Deep Throat, for those of you who don't know, is about a woman whose clitoris is in the back of her larynx.
The problem is in the writing. The movie tells us a lot of stuff, but it doesn't show it, so Linda's character remains hermetic. It is hard to understand what she saw in the sleazy Traynor and why she stayed with him through his abuse: she may have the textbook signs of abused women in general, but as a dramatic character she has little agency. Except for her choice to move in with this creep, she does not propel the story; everything happens to her. Hence she remains, despite Seyfried's excellent efforts, an inscrutable blank.
I enjoyed the first part of the movie, a fun sidetrip through roller skating rinks and bonfires on the beach, a great period soundtrack, and flawless period detail. We get to meet the more genial sleazebags that made that porno: who doesn't want to be in the same room with Bobby Cannavale, Hank Azaria, sporting the most outrageous rug ever, the always welcome Debi Mazar and Chris Noth? Everybody seems to be super nice to Linda at the shoot and she becomes an instant sensation. But then we see her years later, looking lost, taking a polygraph test, and the movie goes back to scenes we've already seen and adds what was happening behind the scenes with the abusive Traynor. This is a strange choice, not only because the scene repetitions are awkward, but because there is no tension between her fairy tale success and the brutal reality Lovelace was living at the same time. Not only is it all re-told after the fact, but it gives the movie an unwanted moralistic subtext, as if it was bad karma for Lovelace to become the most famous porn star ever. It starkly divides her good times from the bad, instead of keeping them mixed, which would have made for a more powerful, richer story.
For a far more nuanced, colorful and fascinating take on the subject, the documentary Inside Deep Throat explores what this movie totally wastes, which is the cultural context of the times. Deep Throat was unique in that it had a fabulous hook, and it was conceived by director Gerry Damiano (Hank Azaria) as an artistic endeavor, with humor and actors and creativity, of sorts. Paradoxically, it was both a symbol of sexual freedom and an exploitative prison for her protagonist. Made for $25,000, it went on to gross $600 million dollars, of which neither Lovelace or Damiano ever saw much profit, and most of which went to the mob that financed it. It became a phenomenon the minute the Nixon administration decided to persecute it.
It is unfortunate that Lovelace leaves out all this rich cultural history about the sexual revolution, Watergate, censorship, the rise of the religious right and feminism in favor of the most commonplace and tawdry aspects of the story. It does not know what to make of Linda Lovelace and her confounding willfulness, acquiescence and victimization, and it squanders other great characters, like Damiano, a sweet guy who thought porn movies could one day be classy, and who made the most profitable film of all time.

In a world where you rarely hear female voices intone movie trailers, a female writer, director, actor and producer has created a winning comedy ...about just such a world.
Multitasker Lake Bell plays Carol Solomon, a vocal coach and daughter of a famous trailer voiceover artist (Fred Melamed), who wants to break into the lucrative and forbidding world of movie preview announcers. But she has her work cut out for her because, like many subdivisions in entertainment, this is a boy's club, full of territorial macho men who will not let women in.
The movie is a prickly romantic comedy, and a smart, satirical look at an industry within an industry. All that unseen voice talent is like a mini-Hollywood with its own prestigious awards, celebrities, groupies and backstabbing competitiveness. Surrounded by a good cast of comedy stalwarts like Demetri Martin (super sweet as the romantic interest), Tig Notaro, Ken Marino, Micaela Watkins, Rob Corddry, Nick Offerman and some fun celebrities, big and small, in cameo roles, Bell tells a rambling story that still coalesces satisfyingly in the end. I wish that Bell, who is lovely and funny, if a bit mannered, had squeezed more fun out of the voices and the accents, but I really enjoyed that she took time to plunge into some real pain, as in an affair her sister has with an Irish man and her ensuing despair over it, or the nasty narcissism of her dad. In a world where so many movies are always about the same thing (guys with tights and cape or gun fetishes), it's refreshing to find a comedy with a great premise, a smart female protagonist and a shaggy charm.
Posted by Grande Enchilada at 12:54 PM No comments: Links to this post 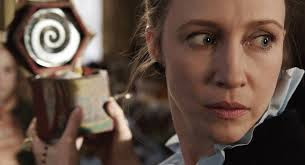 Or how $13 million make everything better. This horror film by James Wan shows a marked improvement of his skills since Insidious ($1.5 million). It has a robust budget, a better cast, it is better directed and better written and it succeeds in having a good amount of chills and scares. It is based on the real-life exploits of Ed and Lorraine Warren (Patrick Wilson and Vera Farmiga), apparently some very busy demonologists, and a case of a possessed house in the 70s.
The Conjuring is too frantic when it could benefit from a more sustained, lingering pace; but the first third, when a family moves into a remote house and things start going bump in the night, is effectively scary because we don't see anything. When we start seeing things in horror movies, the ghosts, spirits, and demons always seem cheesy and they break the spell. You know they are actors in makeup and special effects. But if you can't really see what's behind the doors, that is quite unnerving.
The camera work and the editing are very effective, and in some instances beautiful. Wan's problem may be that he has too many ideas, too many ways to spring up the scares. Sometimes the camera pans unbearably slowly, a la Kubrick, sometimes it is deranged and handheld. And the movie entwines two separate plots: the story of the Perron family and their house from hell, and the story of the Warrens and their work cleansing houses of evil spirits. If you can suspend your skepticism that the only way to fight demons is with holy water, wooden crosses and the Vatican's blessing, this movie is bound to scare you. This storyline raised a lot of questions for me. Do demons only attack Catholics? Could you fight Satan with a star of David, a crescent moon or a statue of Buddha? Anywho, I could believe that the house where the Perrons (Ron Livingston and Lili Taylor -- so good to have her back) move in with their five daughters is possessed by evil spirits; I'm not so sure about Satan and his distaste for the Catholic faith.
Still, it is interesting how good actors can raise the level of a horror movie just by showing up. Case in point is Vera Farmiga as Lorraine Warren, whose performance is so grounded and convincing, she roots the movie in reality. As does Lili Taylor, as Mrs. Perron and her excellent five daughters.  I was grateful that at some point someone finally suggests moving out, which is what I would have done the first ten minutes upon arrival and at the first hint of freezing cold and the smell of rotting meat, but here there are good reasons for having to stick it out: 1) apparently, those pesky demons will follow you to the nearest Holiday Inn. 2) and, much better, this working class family has no money. They can't even afford a hotel. They have put everything they have into buying this hellhole. They're screwed.
The Conjuring has some story problems and it is too action oriented, but I have faith that Mr. Wan, as he matures, will come up with an unbearably scary film, if his good hand at terror continues growing steady. For a typical horror film of today, The Conjuring is a good, scary bet.

Posted by Grande Enchilada at 12:47 PM No comments: Links to this post