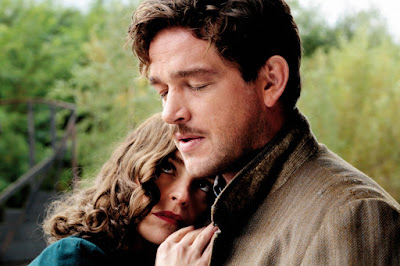 A German-Jewish Holocaust survivor, Nelly Lenz, (the extraordinary Nina Hoss) comes back to Berlin after the war, her burned and disfigured face totally bandaged. She has plastic surgery, choosing to resemble her former self, and not a movie star like her surgeon suggests. Nelly wants to reunite with her German husband, Johnny (Ronald Zehrfeld). She used to be a singer, he a pianist. She comes back to a ravaged Berlin, where her former neighbors are now desperate to survive and to forget and deny everything.
This movie by Christian Petzold is almost pulpy. Phoenix is reminiscent of Eyes Without A Face, 1940s melodramas, of film noir, even of Cabaret. But at the core of this brilliant film is the very real topic of the German reckoning with Nazism.
After refusing to move to Palestine, Nelly stays in Berlin to continue her search for Johnny. She finally finds him, going by a different name, working as a busboy at the Phoenix nightclub. He does not recognize her. Still, it occurs to him that he could use this woman to pretend that she is his returned wife in order to collect her money from reparations. He nicely offers to give her some of it for the ruse.
We are being asked to suspend our disbelief. How can he not recognize her? How can she agree to such a thing? How can she love him? Nelly fabricates an exculpatory fantasy of his not knowing, much like Germans did. Incomprehensibly, she insists on being with him, despite mounting evidence that he betrayed her and that he is abhorrent. Her answer as to why took my breath away.
The question is: after an inconceivable atrocity such as the Holocaust, how can we not suspend our disbelief? If the Holocaust was possible, this story of burning love is also possible.
Petzold balances the twists of the plot and the moral probing of the story (which is based on a novel) by embracing cinematic genres. Realism is insufficient, it seems, to deal head-on with human atrocity and its consequences. The metaphor of a phoenix not only refers to Nelly, who claws her way back to life through love; but to Germany, and how it rose from the ashes through obfuscation, denial, and silent shame, if not sheer opportunistic profiting. Paradoxically, Petzold's reliance on genre actually strengthens the film's j'accuse. Phoenix is both a terrific movie (a stylized fiction, a cultural artifact), and a powerful indictment of German culpability. It also happens to have one of the best endings I've ever seen on film.

Posted by Grande Enchilada at 12:32 PM No comments: Links to this post 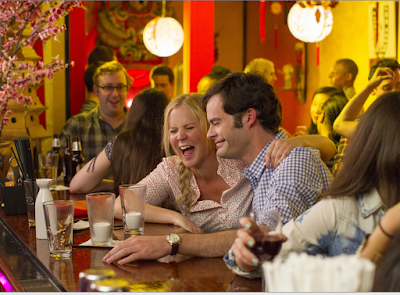 Some are complaining that this movie, written by Amy Schumer and directed by Judd Apatow, turns Schumer's irreverent and subversive humor into conventional comedy. I have less problems with having a happy ending in a romantic comedy, than with the movie trying too hard to appeal to both genders from Mars and Venus. Namely, I'm not interested in Lebron James, or Amar'e Stoudemire, or the NY Knicks, or any of the tepid, has-been celebrities who make undistinguished appearances for no purpose other than to satisfy fanboys. I'm interested in Amy Schumer, who is a sharp satirist and like many great comedians, is able to turn off-putting flaws into endearing quirks, and some seriously funny truth-telling.
I'm also interested in Bill Hader, who is funny and winning as Aaron, the celebrity sports doctor who falls in love with Amy. Besides, it's a sin to waste screen time on sports stars when it could be wisely spent on Tilda Swinton, doing an unrecognizable turn as a horrid editor, or the funny Vanessa Bayer, or Ezra Miller, upon whom one could gaze at for two hours without interruption. And I'm mostly interested in "Amy", a magazine writer and unapologetic slut with commitment phobia, and in how, to her chagrin, she ends up falling for Aaron.
The Knicks must have paid for the branded content, and Apatow and Schumer try very hard to weave them into the story. Except for a funny visual gag in which Hader plays a mano a mano with Lebron, and a droll cheerleading routine, the time we spend in the guys' corner (sports) is deader than a four day old dead fish. It's as if someone were afraid that guys can't laugh at a female character who loves to drink, sleep around and is mortally afraid of commitment. You have to give the guys something else, whether it is projectile vomiting, which I doubt any woman has ever demanded from a movie, or wooden sports stars. Don't we trust that Amy Schumer can carry her own high-concept film without this kind of help? Women rarely get their something else in most Hollywood flicks for guys. We just sit there through the endless chases, gun fights and explosions, our eyes glazing over.
Trainwreck feels schizophrenic, swinging between Schumer at her best, and a patchy script. Apatow likes to sprinkle his comedy with pathos. Alas, as gifted as he is for making good-natured comedies, Chekhov he isn't, and in this film the blend seems particularly forced, since Schumer is primarily a satirist, and satire and pathos rarely mix.
Amy has been given a family sob story. She has a nasty dad (Colin Quinn) who is losing his mind to Alzheimer's, and a sister (the lovely and adroit Brie Larson) who hates her dad. This means tears have to drop, and family reconciliations have to happen. Someone in the chain of command did not quite trust that Amy was sympathetic enough -- hence the melodrama. But what makes Amy Schumer sympathetic, even adorable, is precisely how unapologetic she is. I applaud a woman who makes a violently icky face at the news of her happily married sister becoming pregnant. I don't necessarily want her to be nice.
Schumer's satirical kind of sketch humor may be hard to translate to a full-fledged movie onscreen. Still, that doesn't mean that she has to go all gooey on us. The movie's concept, a woman who turns tables on men by behaving as caddishly as they do, has plenty of comedic legs. Unfortunately, Trainwreck does not totally deliver on the promise of Amy Schumer. The audience expects irreverence and subversion, not a paid commercial for the N.Y. Knicks, let alone a heart-warming story about family, spottily moving as it may be.
Posted by Grande Enchilada at 11:11 AM No comments: Links to this post 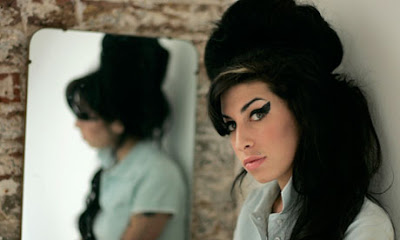 This documentary by Asif Kapadia (Senna) chronicles the meteoric rise and tragic fall of singer Amy Winehouse, who was all of 27 years old when she was found dead of alcohol poisoning, her body ravaged by the effects of bulimia and substance abuse. Kapadia uses only existing footage taken by either those close to Amy, or the media. We only hear the voices of those close to her, we never see them. At times in the movie I missed their faces, because we can read faces better than just voices. Still, this allows Kapadia to portray Amy's life without interruption, as it was briefly lived.
That she was a unique and major talent is clear from the opening images of a chubby pre-teen, authoritatively belting out "Happy Birthday" in a home video, with the chops of a much more mature singer. That she and her working class family were ill-equipped to deal with fame is also abundantly clear. This too-long film condenses well the brutal cycle of adoration and rejection of a fickle public and a ravenous media.  There is nothing both love more than a success story, unless it's a success story that implodes as nastily and spectacularly as possible. This they seem to love with the cruelest glee. And this, Amy Winehouse gave them in spades.
The movie shows how most of the songs she wrote were transparently autobiographical, including Rehab, her monster hit, and Love is a Losing Game. It shows her at her best, and then, rather relentlessly, at her worst. And the same goes for the audience and the media: they adore her, then they jeer her mercilessly when she's down, finally shedding tears for her untimely death.
As is common in these kinds of stories (see: Kurt Cobain: Montage of Heck. See also, Jackson, Michael), toxic people (her husband Blake Fielder) glommed on to her and were instrumental in her unraveling.  It's easy to assign blame: a money-struck father, an ineffectual mother, a junkie leech of a husband, managers who saw the dollar signs at the expense of her health. But what about her own responsibility? Amy Winehouse looked and behaved like a tough cookie, but she wasn't. She was sensitive and vulnerable. She easily fell prey to bad influences and desperately needed someone to impose clear boundaries. However, there is an amazing scene in which she shows that she had enormous willpower, even if she used it mainly to self-destroy. She comes onstage in Belgrade, completely wasted, in front of thousands of adoring fans, and simply refuses to sing. Other performers tend to claim "exhaustion" or a sore throat, and cancel. Not her. She could clean up when she wanted to, and dive into mayhem just as well.
According to her own mother, Amy Winehouse was too big a personality to control, even when she was a child. But although she grew up in a house rattled by divorce, she was surrounded by a tight-knit circle of loving family and friends, some of whose members, like her first manager and her childhood friends, always had her best interests at heart. Not so her dad, Mitch, whose infidelities the young Amy never really could get over, and who, as much as he loved her, seemed to care more for the money rolling in when what she needed was a strong hand to discipline and guide her. It must be unendurable to know that those whom you love most (dad, husband) are exploiting you.
Like a trans person trapped in a body that doesn't feel right, Amy identified as a jazz singer, not a pop star. She admired the great jazz vocalists and would have been happy to be one of them.  In today's world, that is not a financially winning proposition, and she didn't have the stubbornness or the clarity of purpose, perhaps, to guide her own career in that direction. For the music industry, she was too talented to be in a small niche. It is heartbreaking to see her reaction when none other than her idol, Tony Bennett, announces she has won the Grammy for best artist of the year. We see them recording the song Body and Soul together, and Amy is nervous and Bennett is sweet, patient and encouraging. Her loss breaks his heart and ours.

Posted by Grande Enchilada at 10:16 AM No comments: Links to this post 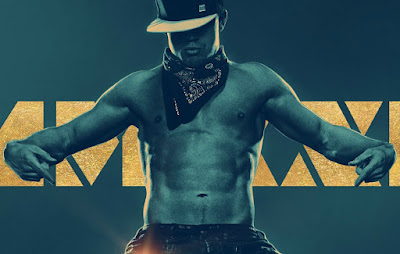 Posted by Grande Enchilada at 5:28 PM No comments: Links to this post