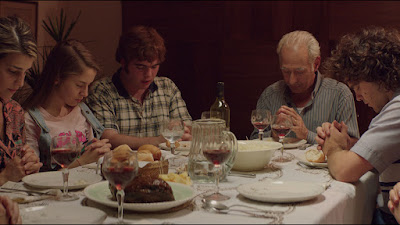 Posted by Grande Enchilada at 4:11 PM No comments: Links to this post 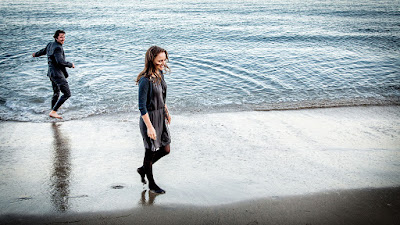 Oh, brother.
You know how they say that people who have everything are deeply unhappy? One, I'm afraid that's a ploy by the rich to elicit our sympathy and prevent us from throwing them all off a cliff. Two, who cares?
I rarely feel a movie is a waste of my time. Even the worst movies have teachable moments. But after the first hour of Emmanuel Lubezki's gorgeous yet Dramamine-requiring images, I started to feel like time was inexorably oozing out of my life with Terrence Malick's phony ode to rich white people's problems.
Now I know that I can happily sit and watch Christian Bale pace wordlessly around Los Angeles for the better part of an hour. But then a thought comes to mind. Why hire one of the greatest actors in the world if you are not going to give him anything to do or say? And why would anyone care about such a character? We know he works in Hollywood because he insists on wearing fancy suits to everything, including the sea, and the two inches of water in the Los Angeles River. This is that kind of movie, in which characters just stand in the middle of that fabled ditch as if it was the most natural thing in the world.
This is a movie in which rich white people show their joie de vivre by jumping fully clothed into swimming pools and/or the sea, as if ruining perfectly expensive clothes and the dry cleaning bill are of no concern to them. The women, all thin and beautiful, when not naked, wear gauzy long skirts to the beaches of L.A. And then they go into the sea with them. Not to die, which at least would be interesting. Just to carouse.
Does Christian Bale play a Hollywood agent? A movie star? An executive? The only reason that I know he plays a screenwriter is because I read it in another review. Do we see him slave away in front of a blank screen? Never.  It looks like he hasn't worked a day in his life. However, his glamorous ex-wife, (Cate Blanchett) seems to have absconded with their beautiful house but then we learn that she is a caring nurse in some godforsaken clinic in the bowels of L.A. Blanchett could be believable as the Great Wall Of China, but seeing her in expensive clothes and then wearing scrubs and touching lepers is a bit of a stretch.
Bale (I don't know the character's name; no one has a name in this movie) has an angry father (Brian Dennehy) and an even angrier brother (Wes Bentley) and he himself is haunted and morose most of the time. One wonders why these people are so aggrieved. They are white, rich, good looking and they live in sunny L.A.
Bale parties hard, fucks all the beautiful women, cruises around L.A. in a magnificent old convertible. What the hell is his problem? His problem is Terrence Malick, who instead of telling a story, paints a tone poem. Alas, there already exists a pretty nifty tone poem about L.A. It's called Mulholland Drive.
Now, there have been some great movies about Hollywood that ooze bile at the industry and what it does to writers, like Billy Wilder's Sunset Blvd. and the Coens' Barton Fink, or Robert Altman's The Player and David Lynch's aforementioned nightmare. Knight Of Cups is not in this hallowed group.
It is too aimless and generic. Yes, the industry is full of greedy bastards and the glitz of entertainment hides unfathomable depths of depravity. Yes, rampant capitalism is decadent and unfair, but, a) tell us something we don't know and b) if you find it so distasteful, why give it so much taste? Knight of Cups is like the In Style magazine version of a Hollywood apocalypse. People party but there is not a drug in sight, they fuck with their clothes on. Their biggest sin is vapidity.
This is Malick's L.A. movie, and once in a while the camera sweeps into the vast, manicured emptiness, the lights of Sunset Boulevard, or down to skid row, where Bale and his brother go slumming for no apparent reason. L.A. looks great but there have been sharper, better L.A. movies. One look at the L.A. River and one really pines for Chinatown.
To make matters more ridiculous, the narrative structure is based on tarot cards, with each card representing a facet of the life of this guy, a rather sophomoric concept. Kudos go to the three editors who not only did a beautiful job with Chivo's swaying camera moves, but who also managed to weave a more or less coherent narrative. In The Tree Of Life Malick was somehow able to marry his spiritual ideas to a simple story of a beautiful family with an angry, distant dad. But this time the conceit feels shoehorned to the milieu. Judging Hollywood or the entertainment industry calls for articulation, irony, preciseness. This movie has no sense of humor, no wit, it's nothing but pretentious mystical bullshit, like a dead serious version of Entourage -- something no one wants to see.
And it goes on forever.
It most resembles a mystical Lifestyles of The Rich And Famous, or, if you are into interior decorating, a catalog of premium real estate properties in Los Angeles. Either way, it's an utter waste of time. And what's with the Jewish music?
Posted by Grande Enchilada at 10:00 AM No comments: Links to this post