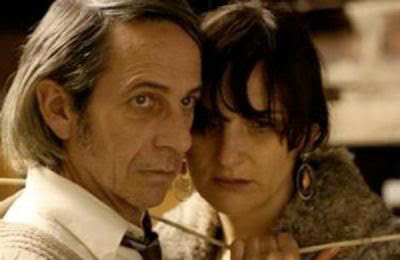 When I saw Pablo Larrain's Tony Manero two years ago at the New York Film Festival, I was very impressed with its dark originality, although it was tough going.
Larrain returns to the festival this year with Post Mortem, a movie that takes place on the days of the coup d'etat against president Salvador Allende. Like Tony Manero, Post Mortem aims to disturb. As in the first film, the protagonist is played by stone faced actor Alfredo Castro, and there are many parallels between the two films. Larrain's creative choices are becoming stylistic tics: a central character that barely registers emotion, a fascination with the cheesier side of show biz as some sort of metaphor for living in an apolitical fantasyland, drained out colors, Bressonian angles, joyless sex, nasty characters, humor so dark it dies in your throat. In short; unabated, sordid gloom. Blokes, a short produced by his company also shown at the festival, deals with the same historical period in Chile and the same topic (the political is personal) in a similar washed out style. Larrain is becoming a cottage industry of dyspepsia. He was born in 1976, three years after the coup, and he grew up in Pinochet's murderous, repressive dictatorship. Hence, his movies are jewel boxes of stylized rage. They ooze moral revulsion. This is visually rendered with a predilection for showing characters eating and having sex in unsavory ways. They are meant to literally create disgust in the audience.
I find Larrain's style extremely interesting and totally legitimate, but labored. Post Mortem is another brutal parable of how the political is intensely personal, and how the evil that society allows, festers inside each citizen that acquiesces to it.
Mario, the main character, works as a note taker at a morgue and is in love with "La Nancy", the burlesque dancer who lives across the street from him. She is mean and crazy, delusional with faded grandeur, even as her sleazy impresario refuses to put her on stage because she is so emaciated, she looks like she just came from a weekend in Auschwitz. There is one scene in the middle of the movie when she comes to visit Mario and he offers her a fried egg. She bursts out crying and he follows suit, slobbering and spilling snot and saliva all over his food. This goes on for quite a while. This is profoundly shocking and at the same time darkly funny, because it comes out of nowhere, as neither of the characters actually reaches out to console one another. Five minutes of grotesque crying and then Larrain cuts to a close up of Nancy being humped, presumably by Mario. There is no tenderness, no joy; she never even looks at him, she doesn't touch him. It's a nasty and sordid world. Again.
Nancy's father happens to be a communist organizer, so that when the shit hits the fan, Mario is obliviously taking a shower while we can hear violence across the street, her house is ransacked and torched and he can't find her, sending him into a desperate frenzy, which in his case is indicated as a microscopic frown. He rescues her super cute dog and heals it. The man is utterly in love.
The morgue, which was a relatively leisurely affair before the coup, becomes monstruosly busy after. Murdered civilians are brought in by the truckload to be catalogued, according to the military's orders, without names, just by gender, approximate age and number of bullet holes. Mario continues doing his job, betraying no opinion of what is going on around him, but he helps to save someone who turns out to be alive in the pile of bodies he is carting to the morgue. He may be stonefaced, but he is not totally inhuman. Only one of the workers in the morgue displays what is commonly recognized as human emotion. She is revolted by what is happening, and she loses it, in the only scene in the film that allows the audience to feel grief and indignation.
Larrain is preoccupied with people who look the other way while tanks are rolling by, who are oblivious to politics and who think that politics don't affect them. And while his massive anger is understandable, his cold blooded approach is too stylized and his deliberately repulsive style ultimately distances, if it doesn't altogether alienate, the audience. I respect that he sets out to provoke revulsion and a visceral rejection of political indifference (he unsparingly portrays his fellow Chileans for the most part, as extraordinarily nasty, self interested people) but I wonder if untempered disgust is enough. If you are expecting Mario to be positively transformed by the end of the movie, you are in for a bitter shock. His amorous travails finally lead him to perform a cruelly horrifying vendetta, sinking him further into his disconnection from the society around him. It's a great ending, but watching Post Mortem is like taking a gallon of bitter medicine. It may be good for you, but that doesn't mean you have to like it.
Posted by Grande Enchilada at 10:44 AM