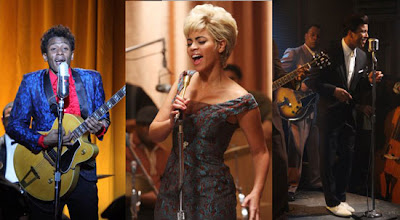 It's amazing how a perfectly average movie like Cadillac Records can be such a source of enjoyment.
The reason is the amazing music of Muddy Waters, Willie Dixon, Chuck Berry, Little Walter, and Etta James, rerecorded and sung quite decently by the wonderfully game cast of the film (Jeffrey Wright, Mos Def, Cedric the Entertainer, Beyonce, Eamonn Walker, etc).
The movie is about the story of Chess Records, founded by Leonard Chess (Adrian Brody, going through the motions) and about the real birth of rock & roll, which if you don't know this by now, was fully created by Black artists, who were cheated out of their royalties because geniuses that they were, they came from humble origins and they were Black, and therefore were patronized and discriminated.
The movie is written in very broad strokes, but the personalities shine through, as does the terrible racism of the time.
The acting is all over the place. In the camp of great performances, Jeffrey Wright is mesmerizing as Muddy Waters, although I could barely understand a word he says in the film, and not only because he has a deep Mississippi sharecropper accent, but because he mumbles. Still, he comes across as a proud man, bedazzled by the surprising power of his own talent, confused about how to deal with fame, power, talent all while being Black. Mos Def is an inspired choice for Chuck Berry and his charm, intelligence and playfulness come through (he is most definitely not the bitter and uncooperative diva of Jonathan Demme's amazing documentary Hail, Hail Rock & Roll, but this is before he screwed up and went to jail and was screwed by music biz execs). He is great. Eammonn Walker is the one guy I would include in a nod for best supporting actor as Howlin' Wolf. He is almost frighteningly intense and utterly convincing. I thought Columbus Short, who played Little Walter was a huge hambone, and so, unfortunately, were the women, most notably Gabrielle Union as Muddy's wife.
Beyonce is much better here than she was in Dreamgirls. Now she can act (not her fault that director Darnell Martin does not rein in the hammier stuff) and boy, can she sing. She is gorgeous and she gives a serious, committed performance. And she may not be Etta James, but she brings power and feeling to the wonderful songs she sings. And she's paying her respects, as well she should.
At this point I have to say that Chuck Berry is everybody's Daddy and without the invention of his incredible sound and the best rock guitar riffs EVER, we'd have had no rock and roll and no pop music as we know it.
Not only was he a musical genius, but his lyrics are a hoot. This is one of my favorite songs of all time:

Posted by Grande Enchilada at 8:04 PM No comments: Links to this post 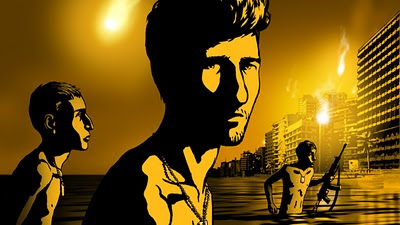 One of the best movies of the year, this Israeli documentary animation film by Ari Folman is a powerful war film as well as an act of expiation and remembrance of the first Israeli invasion of Lebanon in the 80's. As the film begins, Ari Folman claims he can't remember anything about his deployment to Lebanon, but when he hears the recurring nightmare of a friend 20 years later, he has a flashback of swimming in the Beirut sea with fellow soldiers, but he can't remember anything about the massacre of Sabra and Shatila, perpetrated by Christian Lebanese Phalangists as the Israeli army turned a blind eye. The movie is as much about this amnesia as it is about the moral debasement that this invasion brought to Israel and its army. They can thank Ariel Sharon for that.
Through a series of interviews with former army mates and psychologists and a journalist, Folman weaves a tale of loss, memory and the horror of war, and as he engages in conversation, mining other people's recollections, he starts remembering more and more clearly where he was and what he did. Through his personal story and the surreal, compelling stories of his friends, he not only recovers his memory but questions the motivations for the invasion, which was the first time that Israel engaged in an offensive war. I can remember a time (actually all the way up to the Eighties) when there were no such films in Israel questioning the military and its operations. Up to that point all of Israel's wars were defensive and therefore they were deemed just. Nobody dreamed of objecting to serve or of questioning the morality or the motivations of the IDF. Lebanon opened up a can of worms that is still festering, but its aftermath also allowed some needed dissent in Israeli culture.
Now, I don't know what vitamins the Israeli film industry has been taking, but they are working: the recent output is extremely impressive. And if defiance must come through film, like in this movie and the excellent Beaufort, all the better.
Waltz with Bashir is a very intelligent film, and a most convincing war film. Had it been shot in live action, it could not have conveyed with such power, effectiveness, immediacy and originality the eerie madness of war, which it does better than any war movie I can think of in recent memory. The animation somehow makes it more real. (I also think it helps when the filmmakers themselves have been to war. They know exactly what it feels like. They're not making it up). Paradoxically, with animation we are not protected and distanced by the knowledge that the explosions are fake and the blood is make up and the soldiers are actors. The spare, rough animation style is perfectly suited to the topic. It does not beautify nor exaggerate war, but it does give it a surreal, existential sheen. It is totally compelling. And the emotional impact is harrowing.
Meanwhile, critics wax rhapsodic about Wall•e, a calculated, predictable, conventional, formulaic piece of fluff. Movies like Waltz with Bashir and last year's excellent Persepolis show the incredible emotional range and the capacity for mature art of animation. But here, we'd rather live in lalaland.
Posted by Grande Enchilada at 10:27 PM No comments: Links to this post