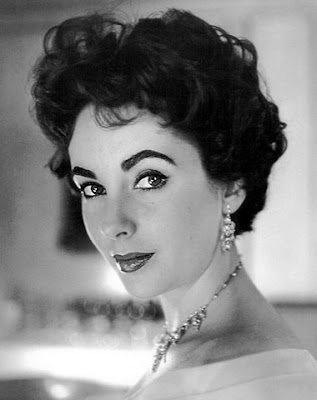 April being the cruelest month, the other day I was thinking of Liz Taylor.
She popped into my mind.
I was thinking that she must be very old and, given her poor health history, look very bad nowadays. And I thought that when that happens to formerly gorgeous movie icons, the best thing is either to go into hiding, or embrace your life and aged looks with a vengeance. Having said that, let's be honest: nobody wants to see a current picture of Brigitte Bardot, and nobody didn't jump and almost didn't have a heart attack when they saw Sophia Loren at the Oscars recently. What I'm saying is, being an international beauty icon is not easy, because age stops for no one, regardless of surgeons and treatments. Some stars age with class (Audrey Hepburn, Julie Christie) but it's not easy and I feel sorry for them all. If I, who have always decried the use of plastic surgery, am contemplating my drooping eyelids with something approaching horror and botox with something approaching possibility, well I can't imagine what it must be like when your otherwordly beauty is your identity. Must be a bitch. Which is why I'm glad I'm not that gorgeous.
So I did run into a recent picture of Liz Taylor in one of the cheesier tabloids. Oy. I guess that age is only good to you if you don't fight it.
Youth is fleeting. It makes me feel sad.
Posted by Grande Enchilada at 1:51 PM No comments: Links to this post

The Mysteries of Pittsburgh 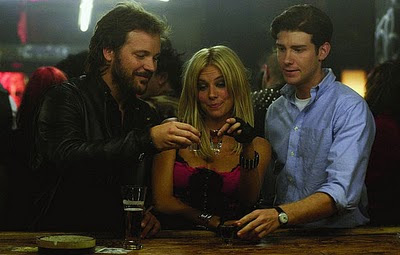 A master class on what not to do. How not to cast actors, how not to write dialogue, how not to rely on unnecessary, deadly voiceover narration, how not to adapt a novel, how not to take yourself so seriously and be pretentious when you do not know how to do things. It was hard going, but I learned a lot. The Mysteries of Pittsburgh, if you must know. Doesn't even approach the mediocre competence of hackwork.
Posted by Grande Enchilada at 1:45 PM No comments: Links to this post 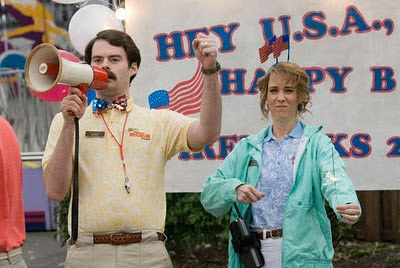 This lovely comedy by Greg Mottola (Superbad) is one of the smarter, less scatological current films about males coming of age. It has a sensitive, wistful quality, complicated characters and a biting, bittersweet sense of humor. If it has a formulaic structure, it doesn't show it. It meanders along, more interested in character than in plot, which is so very refreshing. It is beautifully observed.
It's also an interesting portrayal of class angst, of thwarted expectations. I love the setting of the amusement park where people go to have mindless fun, and all the carnies who work there are just miserable misfits. These poor overqualified eggheads, working in a place full of dummies. That's America for you, a huge amusement park that craves entertainment, and is derisive of intellect.
Adventureland made me feel nostalgic for my hormone-riddled youth. Set in the eighties, it makes one wonder what were we thinking ("Amadeus, Amadeus, Amadeus"... ).
Posted by Grande Enchilada at 1:55 PM No comments: Links to this post

I Love You, Man 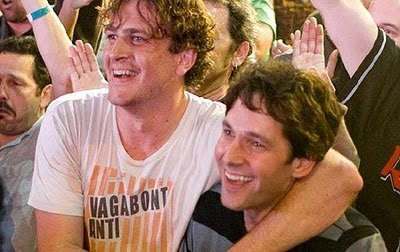 Or in praise of Paul Rudd, our tarnished era's answer to Cary Grant. Please take this with a grain of salt. Clive Owen is Grant's true heir, and if you've noticed, both Owen and Cary Grant come from the other side of the ocean. Americans, I'm afraid, are not big on suave. Still, for stateside romantic comedians, Paul Rudd is the very best we have. He is the best thing in the movie. Hopefully there will be many more and better. He should do Hamlet. For real. He has the right age, the right smarts, and the right intelligence, he can be very sweet, but he has an edge. He would be a lot of fun. Which is something sorely lacking from most Hamlets.
The movie is funny in spurts, but Paul Rudd's performance as a sweet guy who is totally awkward around dudes makes it work. Not only is his timing impeccable and he is a great comedian, funny and light on his feet, but he is also a damn fine actor, and he imbues the character with true sweetness and true embarrassment. You can feel his mortification. He is delightful. As his partner in this bromantic comedy, Jason Segel is also wonderful as a slacker with initiative. The have a genuine chemistry together. They could be our own version of Tracy and Hepburn. Anyways.
The one thing that I wish we could all get tired of is the projectile vomiting, and all the scatological jokes. They are what the audience loves best, but they get tiresome.
Posted by Grande Enchilada at 1:58 PM No comments: Links to this post