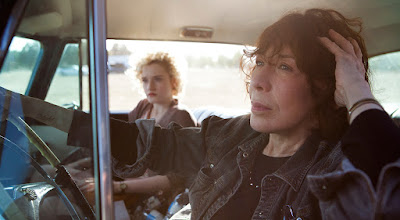 It's always good to see Lily Tomlin in action, even in a creaky little movie that reads like a paean to Planned Parenthood (which needs all the love it can get these days).
Written and directed by Paul Weitz, Grandma is about Elle, a cranky old lesbian poet (Tomlin), who likes to alienate people. She has just broken up with her younger lover (Judy Greer), when Sage (Julia Garner), her teenage granddaughter, arrives asking for money for an abortion.
That for the better part of an hour nobody can come up with the $600 needed to do the deed stretches belief, and this is the kind of formulaic writing that plagues the movie. Elle doesn't have it, having cut her credit cards to shreds, a maverick move if there ever was one.
The movie is a little road trip in search of the dough, in which we learn that Elle has been through that road before. We are told that Sage's mother is a monster, and Marcia Gay Harden tries her best to make her so, although I never understood what she did for a living. She is some kind of neurotic Hollywood executive. The lack of specifics make the movie feel undercooked. And unfortunately, Garner is no match for Tomlin. As underwrittten, she is a typically sullen, uninteresting teen without character.
The best part of the movie is Elle's visit to an old flame (Sam Elliot, doing his best work in years), from whom she tries to get the money. It also provides the hokiest, paint by numbers drama.
Tomlin is funny and caustic, and the movie has some laughs, but it feels weirdly stilted, as if it's not in synch with its own comedic rhythms.
As much as I applaud the right to choose, I don't necessarily thrill to a movie that so transparently aims to pontificate on the importance of a woman's right to do so. A liberal screed does not a compelling movie make.
Posted by Grande Enchilada at 2:01 PM No comments: Links to this post

The Diary Of A Teenage Girl 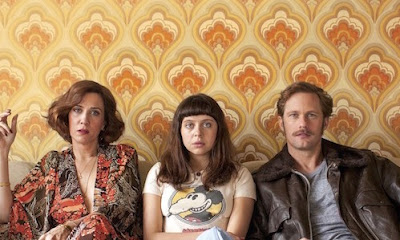 We live in a culture that is more concerned with passing judgment than with dealing with complicated emotional issues and their endless varieties of nuance. People prefer to hector their self-righteous opinions than deal with human messiness. When it comes to female sexuality, women may like to have sex as much as men do, but we are not allowed to admit it. A man can boast of his sexual conquests and feel perfectly at ease appeasing his sexual urges, but a woman who screams to the winds that she loves to shag is branded a slut or a nympho.
Thus, a movie that challenges such puritanical stances is rather refreshing. I can't name a recent American movie starring a sexually unabashed and unpunished female protagonist. Can you?
This provocative film by Marielle Heller, based on the graphic novel by Phoebe Gloeckner, clashes with the culture at large by telling the story of 15-year old and horny Minnie, (the extraordinary Bel Powley), who has a clumsy, painful and inappropriate affair with her mother's boyfriend, Monroe (an effectively spineless Alexander Skarsgård). Since it is Minnie's diary, it is her point of view, which true to teenage reality, is inconsistent to say the least. At times, Minnie seems mature and well-rounded for her age. She is sophisticated, smart, precocious and droll, but when it comes to handling the emotional fallout of seducing a 35 year-old man, she still is just a child, and she acts like one, floundering in love.
It does not help that the adults in her life act worse than unruly children, and that they all happen to live in the San Francisco of the late seventies, with the counterculture run amok. Minnie's clueless, pseudo-liberated mom (Kristen Wiig) parties hard and snorts coke in front of her two daughters. Trying to be hip, she encourages the awkward Minnie to show more leg, get a boyfriend, etc. For instant karma, Minnie does exactly that with her mom's boyfriend. Monroe, he just goes with the flow. He is not the feral predator one expects, but he is amoral, spineless, immature, selfish and stupid. Minnie is way out of her depth, which is what coming of age stories are about. She may think she is empowered, but she is blown apart by the dynamics of the affair, a secret adventure in which she does not really have much say, even though she initiated it and fully consents.
This is not a story of an evil predator against a virginal young victim. The inadequacy and the inequity of the relationship are disturbing and painful. At one point, when Monroe tries to break up with Minnie, she throws a tantrum and he accuses her of manipulating him. He is less capable of handling himself than she is, but she feels totally powerless, because as a young girl, she is.
Powley, who is in her early twenties, has a pitch-perfect sense of teenage self-importance (Minnie records her diary on tape for posterity) as well as of Minnie's inexperience and her emotional hunger. She and Skarsgård are marvelously wrong together.
What saves Minnie, besides her considerable pluck, is that she is becoming an artist. She draws and admires Aline Kominsky (R. Crumb's wife and muse) and somehow emerges through this tough, life-changing experience, with a clear sense of purpose. Her drawings are animated and they are edgy and completely appropriate for the movie. Heller directs her actors with great skill and does not shy away from messy, uncomfortable emotions. She leaves the judging to the audience.

Posted by Grande Enchilada at 11:00 AM No comments: Links to this post 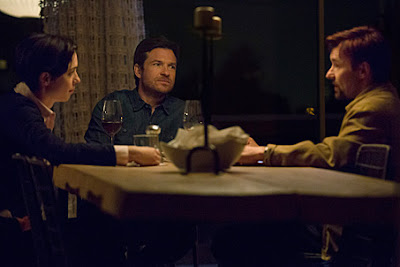 Here's one scary movie that has no creaking doors, no ghosts, no supernatural forces. The evil man can do needs no special effects; it is destructive enough to warp reality for a lifetime. This excellent psychological thriller from the multi-talented writer, director, producer and actor Joel Edgerton delivers several jolts that make the audience jump in their seats, and, better yet, some very disturbing twists firmly rooted in complicated, believable characters.
Jason Bateman plays Simon, a charming achiever who moves from Chicago with his lovely wife Robin (the excellent Rebecca Hall) to a beautiful mid-century house in LA, an exposed house seemingly made of endless glass windows, delicate like an eggshell. Simon and Robin are a lovely couple trying to start a family, and Hall and Bateman have an effortless, lived-in intimacy which is rare in movies.
Bateman is perfectly cast as an ambitious corporate climber with a casual sense of humor and an easy-going charm. He is one of the best straight men in comedy, who specializes in smug all-American jocks. He brings his deadpan humor to this dramatic role. We root for Simon, we are seduced by his pluck, his good looks, and how he charms everyone who crosses his path: such a nice, successful man.  He is so suave that he has somehow talked Robin into moving away and quitting her job as a successful interior designer. Getting his way comes effortlessly to him.
As they shop for new furniture, they run into an old classmate of Simon's, a guy called Gordon (Edgerton). Soon Gordon, formerly nicknamed Gordo, is welcoming the couple to the neighborhood with a zeal bordering on the creepy. He leaves gifts on their doorstep, shows up unannounced, too full of good intentions. However, there is something about Gordo that seems both cowed and aggressive, weak and persistent. He is hateful, as all stalkers.
This movie delivers surprising twists that catch the audience off-guard, and change our perception of the characters, which feels as shocking to us as it does to Robin. The fortuitous encounter with her husband's old schoolmate unravels a web of secrets she had no clue about. It is a terrifying feeling to find out that you don't really know the person you think you know best.
Edgerton creates an atmosphere of tension from the moment Gordo appears at the furniture store, out of focus, on the edge of the frame. The sense of class tension helps, as Simon's golden boy seems to have thrived while everything about Gordo is undefined, and clearly not as successful. Robin is willing to give Gordo's neediness the benefit of the doubt. He has been in the Army, his life has unraveled, and he keeps showering them with gifts. But Simon is mean about him and a little wary.
Unsettling things happen. Simon asks Gordo to stop pestering them. As he explains himself to his wife, he sounds like a mouthpiece for the Republican party. He has little sympathy for Gordo's travails; he claims he had a rough childhood but got up by his bootstraps and made something of himself. His smug charm is that of any garden-variety sociopath, of those people who don't need guns or violence to crush others. In this country, their getting ahead by any means tends to be celebrated. Exuberant admiration for enterprising bullies (from Steve Jobs to Donald Trump, to name just two) is a quintessentially American thing. Edgerton is from Australia. Perhaps his vantage point allows him to see this with unusual clarity.
Although The Gift becomes more conventional towards the end, it establishes its premise and its characters deftly enough that certain exaggerated twists still make sense within the story. It's a small quibble for the rare thriller that uses reality to give us a good scare.

Posted by Grande Enchilada at 11:02 AM No comments: Links to this post

The End Of The Tour 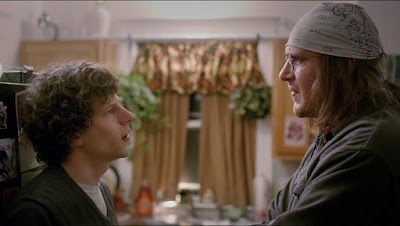 Posted by Grande Enchilada at 11:35 AM No comments: Links to this post