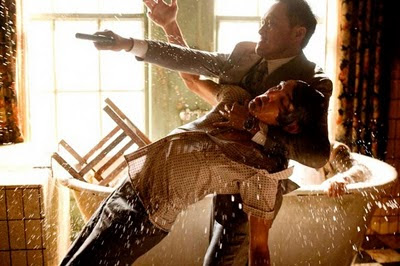 ...aka Deception, starring Leonardo DiCrapio.
Let me put it this way, it takes a lot to make me leave a movie theater before the end of a film. I wished we were at an episode of Mystery Science 3000 so we could just comment loudly to abate the excruciating boredom and the narrative incoherence of the proceedings.
We were far more entertained by a lady who arrived late and sat in our row. So putrid was her body odor that even moving several seats away didn't stem the stink. We had to hold chewing gum to our noses. We preferred to step on the toes of an entire row of moviegoers, rather than pass by her side. Nobody seemed to mind much. It's not like they were going to miss anything intelligible. This was the highlight of the film.
I have not seen so much pointless exposition in a movie since... well, since never. An hour goes by before one has the remotest idea of what the hell is going on. They could have just started the movie one hour into it and no one would be the worse for wear. Because it's not as the exposition helps explain anything.
Inception is incomprehensible. But the worst part is, it behaves as if it were cogent and we're idiots for not getting it.
The idea of manipulating people's dreams has fantastic potential, but is squashed by the fact that the makers of this movie think that human dreams need to have either a gunfight or a car chase or an explosion, or all three, at given intervals. Who dreams like this? People who make movies for male teenage morons (and their older brothers). Hollywood accountants.
I say, bring back the draft and send em all to war, if they like violence that much.
Now, I am BORED AND TEARING MY HAIR OUT WITH BOREDOM by action heroes that have no sense of humor and gazillion dollar pictures with crappily staged chase scenes and shoddy gunfights. Has anybody seen the fucking French Connection, for crying out loud? Learn from Steven Spielberg and John Woo and action masters who have a sense of mischief and lightness and play, I beg of you. And stagecraft.
DiCrapio hasn't made a film in recent memory (last one was the wonderful Catch Me if You Can, 2002) where he shows anything but a furrowed brow, as if he was constipated and shitting eternal bricks at all times. He is supposed to be haunted by the loss of his wife, Marion Cotillard, and if someone is haunting, it is her, but somehow one does not believe for a second that he gives a crap about her.  He's phoning it in, because this is a formula we've seen so many times, it has become stale, even for a pro like him. It looks to be the fate of any American movie star that becomes box office gold that they need to wipe the smile off their faces and behave like Joan of Arc at the stake, without the humility. I can't take all that male self-importance anymore. That "it's up to me to save the fucking world". Don't do us any favors. Please.
I was happy as long as Cillian Murphy, husky voiced, hunky and excellent actor Tom Hardy, and La Cotillard were onscreen. Is it a coincidence that they are not from Hollywood? Peut etre. They were the only alive and entertaining people in the entire movie. Poor Ellen Page tries her best not to be dwarfed by the absurd juggernaut of expense and Joseph Gordon Levitt does the best human impersonation of cardboard ever committed to film. The incoherence, the moronic adolescence, and the self-seriousness of the entire thing just exhausted me.
There are some CGI bits that make you look up once in a while from your own more entertaining daydreams, but my biggest sense of wonder comes from actually wondering why people like this crap, why did it get made and when is it going to stop?
Posted by Grande Enchilada at 11:24 AM No comments: Links to this post 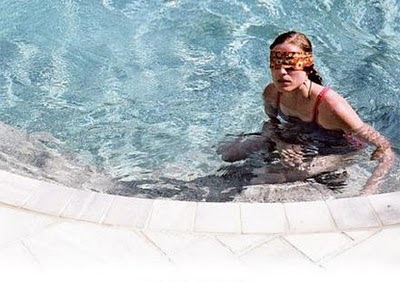 Forget about Inception. The most strikingly original film now showing at a theater near you (Cinema Village, if you live in NYC) is this Greek movie, which won the Un Certain Regard prize at Cannes this year. It is a cruel, yet morbidly entertaining little fable about mind control. I don't want to say much about the plot, so you will be as startled as I should have been had I not read all of Anthony Lane's review (still, had I not read the review at all, I wouldn't have known about this movie, but critics need to stop giving everything away).
Remember the Austrian creep in the news who kept his family in a dungeon? Well, it's  something like that, except luckily this is Greece, and the family lives in a sunny, Mediterranean house surrounded by a tall fence.  The tyrant who keeps them inside is not as crass as to be looking to just procreate with his own children. He is more concerned with keeping them pure and exercising absolute control over them. The fact that he looks like a third rate bureaucrat is one of the many smart touches of the film. His children, however, are positively Riefenstahlian.
One of the most astonishing aspects of this film is that it shows the enormous capabilities of human imagination, not when it comes to designing amusement parks or feel-good 3D movies, but when it comes to making up an entirely alternate reality, in this case lying, to keep people under control. First thing, and most important thing to change is language. Euphemism rules. There is no information about the outside world, and what there is, is distorted (to ghastly comic effect). There are treats if you behave, threats and violent punishment if you don't. The parallels with any paternalistic totalitarian regime (Nazism, North Korea, etc), are clear. But this movie goes beyond politics or ideology. What about the control men seek to exercise over women? For instance, it has been decided that only men have sexual urges (Newsflash: not true). Or parents over children, or basically one being wanting to totally control another, be it a nation, a child, a spouse, or a pet.
The filmmakers have imagined this alternate reality to an amazingly detailed, logically coherent extent. Everything is totally, horrifyingly plausible. With spurts of the darkest humor ever committed to film. There are no false steps (except perhaps one), there are no groaners. There are no movie cliché behaviors. The control of tone in this movie is almost as scary as the control it depicts. It is incredibly well written. There is zero exposition. The audience is thrown smack into the middle of the bizarreness and is immediately given clues to both dispel and enhance the bracing sense of  disorientation. The closest parallel I can find are the sadistic kicks of the Michael Haneke of Funny Games, except Dogtooth is much less histrionic and manipulative and not at all interested in berating its audience. Much, much better.
Be warned that Dogtooth invests absolutely nothing in beliefs like the goodness of the human heart, or the human love of freedom. Au contraire, it places its hopes squarely on the most basic human urges, on human instincts that cannot (but not for lack of trying) be controlled, like sex. Or, at its most benevolent, the human hunger to hear alternate lies.
At one point, control is lost. Chaos appears gradually, in unexpected behaviors, which are not remotely heroic. The whole thing starts to unravel. But this is no Shawshank Redemption. If you are used to a steady diet of Pixarish pieties, this film will feel like someone cracked you upside the head with an iceberg. I love this feeling.

If you prefer a different kind of feeling, you can stay on for the showing of Mademoiselle Chambon, an achingly romantic French film, with the wonderful Vincent Lindon and Sandrine Kiberlain, which, almost the exact opposite of Dogtooth, is a story of human emotion in full bloom.
Makes for an excellent double feature, as long as you don't reverse the order.
Posted by Grande Enchilada at 11:27 AM No comments: Links to this post 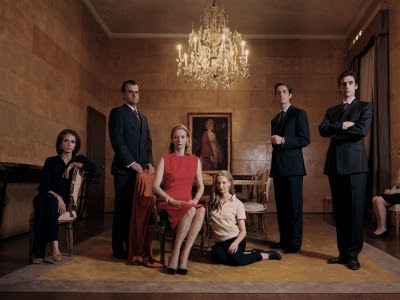 I love Tilda Swinton, who with this movie becomes the actress who is best at having amazing scenes while sitting in the loo. She won an Oscar for her scene in the loo in Michael Clayton, and in this Italian movie she has another beautiful scene, as we say in Mexico, where the queen goes alone. She is gorgeous and elegant but not even her presence can save this movie from being an arty mess.
I love grand family melodramas, especially if they happen in Europe, where there is  old money, history and gravitas, and less vulgarity. And the plot of I Am Love is dreamy: a rich family, succession, rivalry between children, a torrid love affair. The problem is in the direction and the writing. The characters are half sketched, and too much style gets in the way. How many scenes of bees and flowers can one take? Or rain falling over sculptures signifying tragedy -- groaners all. Then some actors are amazing (Swinton, the woman who plays the head maid) and some are terrible. It's all very uneven. Even though director Luca Guadagnino is going for a style of yore (look at the opening titles), directors like Visconti knew that the more tragic the drama, the more straightforwardly it should be told, with bold gestures but easy on the style flourishes. And although there are a couple of lovely, moving moments in this film, too many are overwrought with an artsy touch, where perhaps just straight over the top would have been better. At times, the movie reminded me of that ridiculous, pretentious Louis Vuitton ad that always gets a healthy dose of Bronx cheers at downtown cinemas.
The film has a strange rhythm, it's edited weirdly and towards the end it really squanders our good will and patience, but there is something rich and half rewarding about the milieu, and the asphyxiating atmosphere of family power struggles and dirty old money.
Posted by Grande Enchilada at 11:33 AM No comments: Links to this post 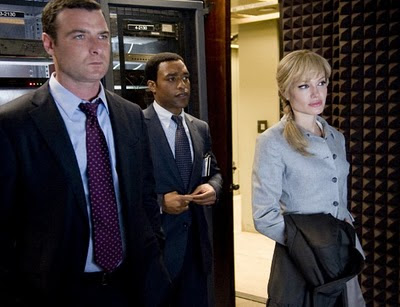 So many questions to ask.
1. When the excellent cast (Liev Schreiber, Chiwetel Elijofor, Daniel fucking Olbrychski, from all those great Wajda films) of this dreadful movie read the script, did they just skip to their speaking lines, or did they realize they were going to be in a Waring Blender for 2 hours?
2. Was there a story in there somewhere that was left in the cutting room floor, or was it always mindnumbing, badly staged chases and violence?
3. Who absconded with the story? And the sense of humor? A Russian spy?
4. When did Phillip Noyce become such a cynical hack?
5. Is there no shame left in Hollywood?
6. Why?

I understand that Miss Jolie has many mouths to feed. But she could earn her keep in movies that are not as morally and artistically bankrupt as this one. She has great presence. She is a good actress. She looks like a trillion bucks (although she must be famished). There is not enough Good Will Ambassador work for the Unicef in this universe to atone for this crap.

Mind you, I can enjoy an action movie here and there. Some are actually good. I'm thinking, for instance of John Woo's Face Off, which was oodles of fun and the action sequences were thrilling. There are other examples. But Salt is a ghastly affair.
Posted by Grande Enchilada at 11:30 AM No comments: Links to this post