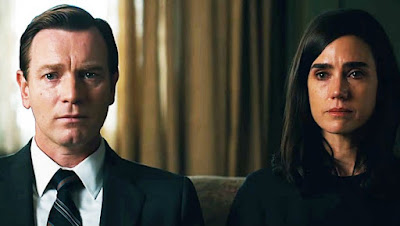 I find Ewan McGregor utterly charming and I was rooting for his first directing foray, of American Pastoral, based on the novel by Philip Roth. Alas, pretty much everything goes awry: bad casting, a stiff script, and an equally stiff directorial job.
McGregor plays Seymour "The Swede" Levov, a Jewish Wunderman: a legendary athlete, blond, and blue-eyed all-American Jew in the fifties. He marries a non-Jewish beauty queen (Jennifer Connelly) and seems to have an idyllic life. His daughter Merry (a very good Dakota Fanning) has a stutter and soon reveals a subversive streak. As her therapist intimates in the movie, being the spawn of perfection (athlete + beauty queen) must be hard. She is a teenager in the late 60s, outraged by the war in Vietnam and seduced by revolutionaries. She bombs a post office and destroys her parents' lives.
It's a great story, but in the translation to film much has been lost, mainly sharpness of observation, and other details that make the characters complicated. Philip Roth revels in human contradiction, to say the least, but this movie is too prim.
As with Natalie Portman's directorial debut and other movies by actors, being a good actor has nothing to do with being a good director. Directors bring scripts to life and make them look real and authentic. This is very hard to do. The scenes in American Pastoral feel lifeless, even though the actors are all doing their utmost. The pace is not glacial; there's no pace. It's dispiriting since it is obviously a serious effort.
People of color complain of whitewashing in movies. I think Jews can be added to the mix. You don't necessarily have to be Jewish to play a Jew, but it adds authenticity. McGregor is a good actor but he ain't Jewish or from Newark, no matter how blond his hair or blue his eyes. Liev Schreiber could be a better fit for the role. David Strathairn is too virtuous for the role of Nathan Zuckerman, narrator and Roth's alter ego. Except for the great Peter Riegert as The Swede's dad, the whole thing feels ersatz. Stories where people age dramatically are tricky, and the makeup job here is unconvincing. There's a scene at the beginning of the movie between Strathairn and an actor who is obviously a much younger man caked with old man makeup. It's hard to get invested in the story with such distractions.
However, one scene packs a punch. A young, arrogant revolutionary brat called Rita Cohen (Valorie Curry) tells Levov that she knows where Merry is hiding. Rita screams at Seymour all the terrible things she assumes he is: a bourgeois pig, an all-star bully, his wife a vapid beauty queen; his family of glove makers, exploiters of the workers. None of it is remotely true. The ease with which ideology paints people with a wide brush comes alive in this exchange. It's good shorthand for the awful combination of youthful arrogance and dogmatism, for the simplistic zeal of revolutionaries, and for a chasm of incomprehension between generations that has not been as keenly felt at any other time in American history as it was in that turbulent period.
American Pastoral, is, among other things, about the tension between the desire to be generic (Jews who yearned to assimilate seamlessly into the American dream when that dream erupted in flames) and their impossibility to be generic. This film version is a generic movie that defeats its own purpose.

Posted by Grande Enchilada at 10:47 AM No comments: Links to this post 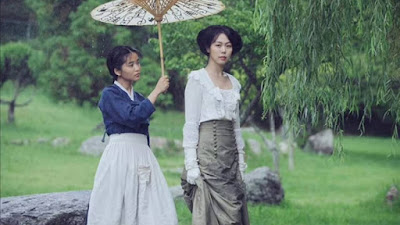 Sumptuous, perverse and exquisite, The Handmaiden, by Korean auteur Chan-wook Park (Oldboy, Lady Vengeance), is one of my favorite movies this year -- a big, bold tale, the story of an epic swindle, a Chinese box of plot twists and a refreshingly compelling erotic story with a feminist streak.
Holding such disparate strands together is an heroic if not an impossible task, but director Park tells the intricate story with humor, suspense, feeling, and finesse.
The excellent screenplay is by Park and Seo-Kyung Chung, based on a novel by Sarah Waters, which has been transposed from Victorian England to Japan-occupied Korea.
In 1930's Korea, a con man pretends to be a Japanese count in order to woo a beautiful, rich Japanese woman into marriage and then abscond with her money. For that purpose, he plants a young swindler to be the lady's servant and convince her fall for him. That nothing goes as planned is an understatement. As the story unspools amid ravishing beauty, we learn that nothing is what it seems.
This is the story of a major con, told in three parts, from the point of view of each of the main characters. The second chapter is a retelling of the first but from the point of view of a different character. Watching the same scenes from a different point of view adds enormous richness and amusement to our understanding of the story.
But it is also the story of strong women controlled by a male-dominated system. Lady Hideko (Min-hee Kim) is the niece of a cruel and perverse man who is obsessed with books (it turns out that his obsession is not as healthy as it seems), and her handmaiden Tamako is also controlled by a crook. The women seem to be pawns in the designs of these men, but they are strong and willful and they can see which way the wind blows. They are the main characters and they imagine a different narrative for their destinies.
What makes the movie delicious are the revelations that Park keeps coming at the audience, which for the most part, are truly surprising. At almost two hours and a half, the film is enormously entertaining and holds you in its spell. The entire movie is an elaborate tease. I usually have no patience for movies that tease the audience, but The Handmaiden is as much about keeping the audience on our toes as it is about revealing deeper insights. What is more precious than money? What is true knowledge? Can you really control someone else? Best laid plans can be crushed by the unpredictable forces of love and desire. At the same time, I am grateful for a film that does not have a moral agenda or an important message to impart, but for the satisfying delight of a good yarn, well told.
Nowadays, it's rare to find a decent film that has a powerful erotic element. But in The Handmaiden the sex works. In contrast to a movie like Blue Is The Warmest Color, where the sex scenes became porno tableaus disembodied from the rest of the story, here the lovers bring their characters to the erotic action. What we know about them helps make the scenes a necessary part of the story, casting light or shadows on the characters, depending on whose point of view we are looking at.
Park is known for his notoriously violent movies like Oldboy, and he can't restrain himself from showing a bit of grisly torture towards the end. However, he has a prodigious visual imagination and the movie is not only gorgeous in its cinematography and production design, but in how confidently Park tells the story with images.

Posted by Grande Enchilada at 4:41 PM No comments: Links to this post