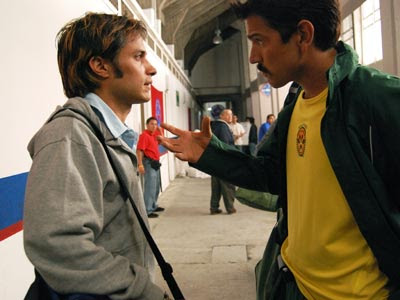 Such a disappointment in so many levels.
The one good thing it has going for it is the charming, funny, committed turn by Gael García Bernal, who is a bona fide movie star, with a face that no camera (or woman, or gay man) can resist.
The rest is at turns pretentious, too breezy, not breezy enough and frankly territory that has been stomped to death about Mexican males and their twin obsessions, male homosexuality and mothers (memo to Mexican males: FOR THE LOVE OF GOD, GET OVER IT ALREADY!).
We were trying to figure out why this movie by Carlos Cuarón (brother of Alfonso) doesn't work. For me, the main reason is that the characters are passive losers to which things happen to, as opposed as them making things happen to them, which is the essence of drama. No matter how charming or likeable, if they are only the hapless recipients of twists of fate rather than the architects of their own destinies, there is not enough interest or momentum to sustain the story. Gael inhabits his character, Cursi, with far more conviction and less of an exaggerated hick accent than Diego Luna, who is not believable as Rudo, who is supposed to be a tough bastard. They have a nice rapport together, sort of like the Tracy and Hepburn of guys, but its not enough. Actually, the actors try their best to fill the void. They are both written as total losers and it's hard to keep up the good spirits and the empathy when they don't seem to have the minimum of resources to get a grip on their lives.
This I find quite unsettling. Is it a coincidence that because these two brothers are peasants, they are so passive? Is this yet another subtle form of the contempt that many Mexicans from the upper classes refuse to believe they have for their less fortunate countrymen? I found Diego Luna's accent bordering on the offensive. But more disturbing is the fact that the brothers are treated as wide-eyed innocents, passive vessels in a corrupt world, yet another insulting version of the noble savage, almost.
I would think that Carlos Cuarón, who cowrote the splendid, socially smart Y Tú Mamá También, was above this kind of patronizing attitude.
There are many instances of topics illustrated too offhandedly, with a brazeness that is not smart but artistically irresponsible. For instance, the lovely young sister of Rudo and Cursi marries an old, fat, rich narco and everybody in her family seems to think it's all hunky dory. No doubt the narcos' riches are seductive to many of the poor, but if a satyrical point is being made, it's hard to see exactly what it is. That we Mexicans are all complicit in corruption? That without resources everybody falls? It's a disgusting argument. This lack of a strong point of view makes the movie seem stupider than I suspect it wants to be.
Posted by Grande Enchilada at 1:22 PM No comments: Links to this post 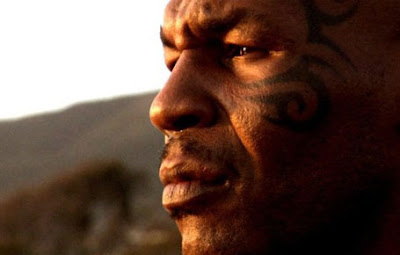 I pretty much hate James Toback, who I think is a pretentious, untalented hack. Nevertheless, I went to see Tyson, his film about that crazy boxer who bit people's ears and who scared the living daylights of his opponents on the ring. This is not a conventional documentary in that there is no interspersed commentary from sports authorities and the usual pompous talking heads. This is just Tyson on a quiet riff, recollecting his life in tranquility, a la Wordsworth. It is totally mesmerizing to hear him talk about his past, sometimes using big words like skullduggery (I don't even know what it means), with an impressive degree of forgiveness and understanding for some (Robin Givens), and seething outrage for others (Desiree Washington, Don King). He appears as some sort of lethal innocent, which is an utterly fascinating thing to be. He is, by the way, quite hard on himself, rueful, almost wise. He still doesn't seem to have the self-confidence that could have made him a more well-rounded person, and better suited to fend off the surrounding leeches.
One thing is clear. He probably has lasted much more than he would, had it not been for the guy at juvie who taught him to box and sent him over to Cus D'Amato, his trainer and father figure. A young hoodlum, with a very troubled family life, he could have ended up dead or forever imprisoned long ago. But Cus D'Amato took him under his wing and made him into the scariest punching machine ever and into a suddenly wealthy man.
The boxing footage is the most exciting part of the doc. I like boxing, I don't know why. I salute anybody who had the balls to be on the opposite corner of Mike Tyson. I almost cheered when I heard him recount the beating he gave Don King, the only instance of me advocating violence against the elderly.
Tyson is almost a Shakesperean character. Rags to riches and almost back to rags with a vengeance.
The movie is almost mesmerizing, yet a little dull; ultimately sad and moving.
Posted by Grande Enchilada at 1:28 PM No comments: Links to this post 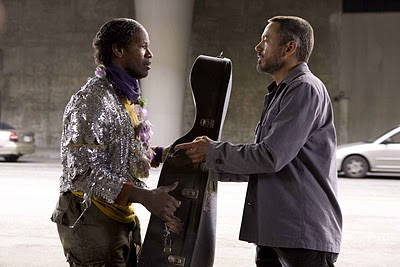 The Soloist:
The first five minutes of this movie, I thought I was not going to endure the cheesy self-importance and the abominable clichés about a newsroom and newspaper people. But despite the fact that this is a very conventional, obvious Hollywood movie, it gains an edgy quality, totally contrarian to its own slickness, thanks to the flinty performance of Robert Downey Junior, overacting like a hamhock to play reporter Steve Lopez, and the amazing, totally believable performance of Jamie Foxx as Nathaniel Ayers, the real life schizophrenic bum and Julliard dropout that inspired this film. I predict Oscar nomination for Foxx at the very least.
Downey, a man I will not refuse should he ever ask, is fascinating. He totally overacts most of the time, but in the scenes that require the most tectonic reactions, he goes all quiet and does gorgeously minimal work. It is very effective, although I have to say this is the first time he ever gets on my nerve. 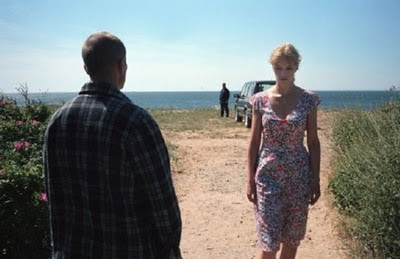 Jerichow:
A super cool German remake of The Postman Always Rings Twice. Is this a great story or what? And this movie tells it really well, with little artifice and lots of suspense. 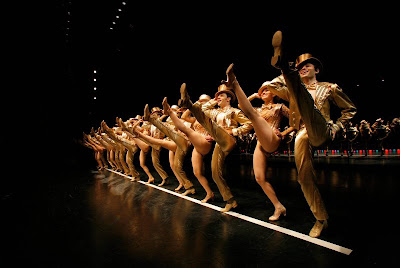 Every Little Step:
I confess: I know the entire score of A Chorus Line by heart. I saw it around 1974 on Broadway and it blew me away. So I had to see this workmanlike documentary about the casting process for the recent revival. It was fun while it lasted, but now I think, meh. For true inspiration, nothing beats Anvil! The Story of Anvil, a movie I will champion to anyone who will listen. 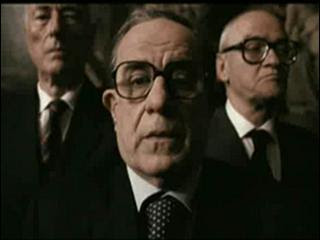 I strongly recommend Il Divo, by Paolo Sorrentini. A strange, hypnotic film about the life and times of Giulio Andreotti.
Posted by Grande Enchilada at 1:30 PM No comments: Links to this post

The Limits of Control 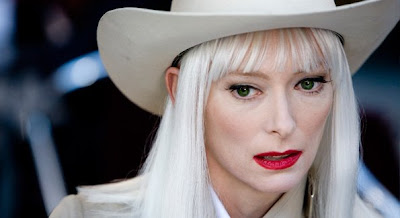 Or rather, The Limits of Patience. God almighty, you'd think that at this stage in his career Jim Jarmusch would have outgrown his most annoying shtick, but to judge from this movie, it seems he's gone back with a vengeance. I, my dears, have never really been a fan, because his facile and calculated hipness gets on my very last nerve. I have always found it sophomoric. However, I did enjoy Down by Law and I really liked Ghost Dog. That's about it for me. Why, then, did I consent to sit through this puerile exercise in mental masturbation? 1. Because we were able to sneak in after watching Anvil!.
2. Because I heard it was shot by Christopher Doyle and one always wants to subject oneself to this whenever possible (regardless of the fact that Mr. Doyle works mostly for filmmakers I find insufferably boring, and I do mean Wong Kar Wai).
In any case, the movie looks beautiful. The framing is gorgeous, the colors are divine. I get the funny feeling, a queasiness at the pit of my gut, that the Spanish government is giving money to American filmmakers (Woody Allen, this guy here) to make extended tourism brochures on their behalf. It's a newfangled and astute kind of product placement, but I hate it. If I want to see pictures of Spain, I can buy postcards.
I loved the music by Boris, whoever he is. But the rest is just a dumb, obnoxiously pretentious sort of poetic parable in which talented actors like Tilda Swinton and John Hurt and Gael García Bernal and Bill Murray are left to fend by themselves playing symbols, as opposed to characters. You can see them struggling for dear life to give their mystifying dialogue a semblance of reality.
As for the meaning of it all, I could surmise it's some sort of meditation on art, and bohemia and the evil of the Americans, whatever. When the already punishingly slow procedures grind to a halt for an interminable flamenco number, you know you are in deep shit.
Nothing makes my blood boil faster than pretentiousness. It's still simmering as we speak.
Posted by Grande Enchilada at 1:43 PM No comments: Links to this post

ANVIL! The Story of Anvil 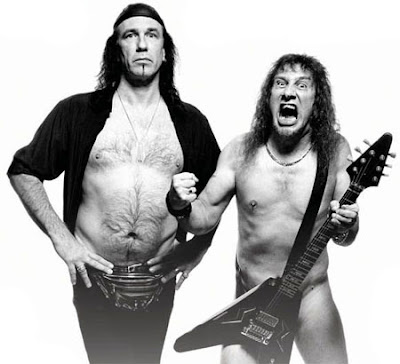 Who would have thought that a documentary about a heavy metal band would be the most poignant, stirring movie of the year? Anvil! follows "Lips" Kudlow and Robb Reiner, these two now middle aged Canadian Jews who started this band in the 80s, were at the threshold of stardom but never found it. 3o years later, they are still trying to keep the dream alive, and it eludes them with a cruel streak, like fame tends to do for those who seek it. But these guys don't so much want fame as they want recognition and respect and someone to pay for their gigs, and more fans to delight.
One wavers between thinking they seriously need to grow up, and rooting for them. Anvil! is a movie about failure, and about true artistic struggle but it is also a movie about joy and purity and total commitment to your art. The heavy metal milieu just adds plenty of richness and texture, and yes, hilarity. It is funny, painful, heartbreaking, and ultimately truly inspiring. I don't think I have ever seen a performer more bathed in sheer joy and abandon, than Lips, even if he is playing in a German basement for one fat fuck sitting in a rocking chair. I bawled. And my tears were the kind of tears one is happy and grateful to shed at the movies. Bitter and sad and incredibly tender.
Everybody needs to see this film. And it better be in the Oscar pool next year.
Posted by Grande Enchilada at 1:39 PM No comments: Links to this post