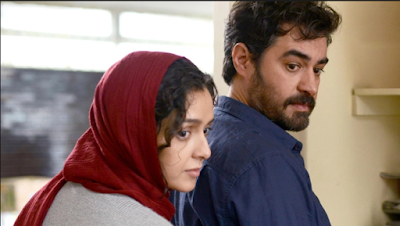 The new movie by the extraordinary Iranian writer-director Asghar Farhadi is nominated for a Foreign Film Oscar and won the Best Screenplay and Best Actor prizes at Cannes.
Farhadi's movies are about middle-class Iranians and how they go about navigating their lives in a country that seems to be stifled by state-imposed traditional values. In A Separation, a couples' divorce drama unleashes a ripple effect that seems to destabilize everyone around them.
In the masterful About Elly, a woman tells a little white lie that leads to tragedy. In The Salesman, something more violent is at work, but Farhadi's preoccupation is the same: how an oppressed society handles the pressure. Somehow he manages to get past the censors; except for a judge in A Separation, he never shows the authorities. He doesn't need to. He shows what happens when people have to live by their rules. People exercise self-censorship, talk in euphemisms, lie and omit things constantly. It's the only way to steer clear of absolute judgment.
Farhadi is a great writer of suspense, but his movies are not about criminals and detectives. They are about family and society. Going into his stories is like unraveling a thread in a very complicated maze. We become detectives. Like the characters, we find out things because of telling details, off-hand remarks, neighbors' gossip. That's because anyone rarely says anything directly.
Emad (Shahab Hosseini, excellent) and Rana (Taraneh Alidoosti, who should have won Best Actress), are married actors who are starring in a modest production of Arthur Miller's "Death of A Salesman". That is, they are sophisticated and cultured. One day, Rana is attacked in her own home. She refuses to go to the police. In this, she may be no different from any victim of sexual assault in this country who fears that she will be treated like the instigator. But the sense of shame pervades everything and everyone. Even her own husband, who is a beloved teacher and who loves her, lords patriarchally over her, is so ashamed himself, that he can't even bear to ask her directly, as she can't bear to answer. The words "rape", or "assault", are never uttered. The fact that she left her door open -- an innocent, terrible mistake, can be misconstrued not only by the police and the courts but by family and friends as some sort of personal depravity on her part. So Emad takes things into his own hands and for the most part of the movie we watch as this couple cannot bring themselves to confront what happened head on. He's full of controlled rage, she is traumatized, and their inability to come together in truth threatens to dissolve their marriage.
Farhadi posits that in such a culture everything is a mystery, and since people go to great lengths to avoid the law (not because they did something wrong but because they fear its intransigence) they get into terrible moral dilemmas. They are on their own. What the state seems to demand from citizens, unattainable personal virtue, becomes a show, an intricate performance rife with euphemistic codes of conduct that people must interpret constantly. And we're talking about perfectly decent people. In order to appear virtuous, mainstream citizens have to lie. Because human relationships are messy and human beings are fallible, everyone is somehow suspect.
The opening scene takes place in an apartment building that is being evacuated. It is on the brink of collapse. Are we at war? Has there been an earthquake? Farhadi pans almost demurely to a bulldozer next door, ripping the earth out from under the escaping citizens. If that is not a concentrated metaphor for man-made hubris, I don't know what is.
Then for the next two hours, as Emad and Rana find a new apartment through the benefaction of an actor friend (beware of people who volunteer favors), we are immersed in a moral whodunnit of which the revelation is a complete shocker.  Once we get past the shock, there is more in store for us; two or three astounding moral twists that make us question our own capacity for judgment, mercy and retribution. They are truly shocking, for they are truly human.


Posted by Grande Enchilada at 5:31 PM No comments: Links to this post