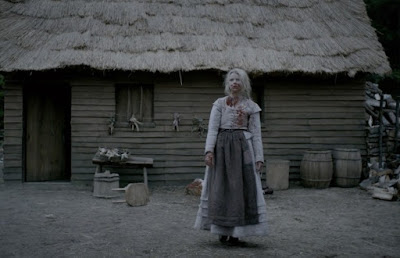 With the words "A New England Folktale", director-writer Robert Eggers sends us into a world of potent archetypal imagery that slowly and effectively creeps under our skin. A devout man (Ralph Ineson) and his family are banished from a community of Puritan settlers and they move to the edge of ominously looming woods. Soon weird things start happening. But they are not the sort of weird things we're used to in horror movies. This is not about ghosts or haunted houses. It's about the ancient iconography of evil and in particular of witches, which were all the rage in 17th century New England.
The family is vulnerable to evil for several reasons. Although concrete reasons are not given, the father is expelled from the community because of the sin of pride. Apparently, he feels these people are not pious enough. He looks like a dead ringer for Jesus Christ, which is no accident. He may be devout but it turns out that, as most people, he is human and prone to deception. More dangerously, he has a lovely young daughter, Thomasin (Anya Taylor-Joy), who is becoming a woman, and so she is vulnerable to be a conduit for evil. She is the very image of purity and does nothing remotely inculpating, yet horrible things happen around her. The movie lays bare the raw symbolism of the idea of witches, which has to do with the fear of female power, from virginal purity, to ripe seduction and wrinkled old age.
I kept thinking, "these are the people who founded this country": inordinately righteous, and superstitious, prone to mass hysteria on account of their obsession with the devil. They are not too different from the speaking in tongues evangelicals who try to impose their judgmental worldview on everybody else today. But this is not really a movie about politics. The most original aspect of The Witch is that it is about a system of beliefs and a set of myths and symbols that we have almost forgotten, but that took hold of people's consciences, imaginations, and their subconscious minds for centuries. Nowadays, the powerful images of folk tales trickle down to us in watered down and almost comical horror movie tropes, or have been defanged by the likes of Walt Disney, who stripped them of their powerful sexual and psychological connotations and rendered them in pastel colors. Eggers brings back the originals with a vengeance.
Is Thomasine a witch or not? She protests her innocence at every turn, but she also exudes a quality of mischief and sensuality that could well be a sign of perfidy. She has lustful, or at least, troubled dreams and in a pivotal scene, she acts rather seductively towards Caleb, her younger brother (the excellent Harvey Scrimshaw). She is not ashamed of her beauty and her growing power, and these may be subtle but undeniable signs of her corruption. According to Christian beliefs, the way the devil works is by shifting shapes and taking the appearance of goodness. We don't really know because Eggers sticks to the ambiguity of whether she is a witch who orchestrates chaos, or she is a pure, innocent creature who is the victim of very bad mojo.
If the movie takes its time establishing the daily life of the family, the moment bad things happen, they increase gradually to a bizarre pitch. But nothing is predictable and shocks do not come at set intervals, which is wonderfully unnerving. One of the most unsettling, if not downright scary scenes, involves a possession that makes the one in The Exorcist look like a cheesy Vegas extravaganza.
And the use of metaphor is beautiful. As he writhes in demonic possession, Caleb vomits, not day-glo green bile but a fully formed apple, an ancient symbol of sin.
If you know your iconography of evil, the sight of Black Philip, a horned goat, is a dead giveaway that the devil has made itself at home. Because it is a folk tale, everything is metaphor: the woods, Thomasin, a rabbit, an apple, the father. But because it is a movie, it feels real and it plays with our sense of reality. Are supernatural things happening, or are these the visions and dreams of an impressionable Thomasine? Is the family in the clutches of mass hysteria?
In most horror movies, at the end of the scare fest order is restored, goodness wins the day, or the door is left open for a sequel. This is one of the few horror movies that doesn't end with a return to normalcy. This is very unsettling, not only because evil is triumphant, but because it makes us notice how inured we are to overused storytelling clichés.
The Witch is subtlely creepy. The cinematography by Jarin Blaschke is beautiful, with only candlelight or natural light throughout, and the use of ominous camera pans works its scary magic.
If I have qualms, they are that perhaps Eggers is a little too obsessed with authenticity and that the characters speak with accents that are hard to understand. Although the music by Mark Korven is applied mostly effectively, there is a moment at the beginning where it stacks the deck unnecesarily. And some of the motivational cogs of the plot were not clear to me. But Eggers has a firm grasp on creating powerful, disturbing imagery. He understands that this archetypal imagery is very basic, but that's where its power lies. I was very impressed with the costume design, with the coarseness and cut of the clothes, and it turns out that prior to this, he was a costume and production designer. This is a very solid debut feature.

Posted by Grande Enchilada at 12:24 PM

Email ThisBlogThis!Share to TwitterShare to FacebookShare to Pinterest
Labels: Horror, Sundance, The Witch