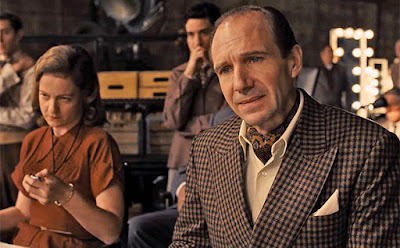 This movie is the sweetest bonbon: the Coen brothers' valentine to movies and to the old Hollywood studio system. If you are a movie lover, you'll get a huge kick out of their endlessly amusing treasury of references to different genres, movies and actors. If you are not familiar with the names Esther Williams, William Powell and Myrna Loy, Carmen Miranda or Walter Huston, you may still enjoy the trademark Coen silliness, framed by the gorgeous cinematography of Roger Deakins, the spectacular production and costume design, and the wonderful cast of thousands, which includes George Clooney, Tilda Swinton, Frances McDormand, Scarlett Johansson, Channing Tatum, Jonah Hill and Ralph Fiennes, among others.
I hope the Academy waits to give Roger Deakins his long deserved Oscar for this movie. His cinematography, in 35 mm, no less, is a love letter to Hollywood films. It pays homage to every trademark Hollywood look of yore. He exquisitely and accurately recreates the sharp black and white of classic romantic comedies, the vibrant, primary Technicolor of musicals and epics, and he bathes Hollywood in a sensuous, warm and golden light, which was what made the studio moguls choose Los Angeles as the home base for their industry.
The plot, as Coen stories go, is a quirky caper about Eddie Mannix, a Hollywood studio enforcer (Josh Brolin) who has to fix everyone and everything so that the studio he works for, Capitol Pictures, functions properly. He's a straight arrow and a problem solver; and boy, is Hollywood rife with problems and people who are rarely any kind of straight. He needs to contain an Esther Williams-like star (Scarlett Johansson) whom the studio casts as an innocent and virtuous mermaid, and who is anything but. Because of casting problems, he has to turn Hobie Doyle, a country bumpkin cowboy movie star (the excellent Alden Ehrenreich) into a leading man for a Noel Coward-ish (Ralph Fiennes) drawing room comedy, except he sounds like a hick and can't act his way out of a paper bag. And then he has to contend with the fact that his hugest star (Clooney, always game for the Coens) mysteriously disappears from the set where he is shooting a movie about the appearance of Christ.
Nothing is like what the studio wants it to be, which is innocent and flawless. Only Mannix knows everybody's dirty little secrets and his job is to bury them. Everyone has a reality that needs to be transformed into wholesome fantasy, which in Hollywood, is a tall order.
That the movie starts with a looming crucifix and that Mannix happens to be a devout Catholic seems arbitrary, if not rather insane, but this is beautifully paid off, since this is a movie about faith, big stories, entertainment and the extraordinary feat of illusion that movies are, both on the screen and behind the scenes.
The zany plot involves disgruntled writers, communists, Herbert Marcuse (you heard that right), a dog, and two gossip columnists played by Tilda Swinton. It sometimes zips and it sometimes sags slightly, as it is sprinkled with cameos by movie genres.
Channing Tatum stars in a delightful tap dance number in the style of Gene Kelly's dancing extravaganzas. Scarlett Johansson dives into a gigantic pool of mermaids. Jack Huston banters with a dame in the back of a car, and Hobie Doyle goes from being an eloquently silent cowboy to the most maladroit leading man in film history.
In my favorite sequence, Mannix pays a visit to the editor of the studio, C. C. Calhoun (the one and only Frances McDormand) who is cutting a Thin Man kind of movie, in a moviola, while blithely smoking two inches away from highly flammable celluloid. The Coens lovingly render the clicking and hissing and spooling of film, spliced by her dexterous hands. They show how fragile a movie could be (and you'll find out just how dangerous). But the scene also shows in beautiful cinematic shorthand how a resourceful and embattled director (Ralph Fiennes, polishing his funny bone), and a good editor can turn a terrible actor like poor Hobie Doyle into a smoldering movie star with a few deft cuts and angles. Sheer movie magic.
Meanwhile, Mannix is being courted by the military industrial complex for an "easy" 9 to 5 job where he won't have to deal with egos and crazies all day long. He may be the ringmaster of an absurd circus but it is his circus, with his maniacs, and he can't turn away.
I kept wondering what does Jesus have to do with anything, but in the end, Hail, Caesar! is about two competing versions of faith and mythmaking: religion and the movies. If I understand this movie correctly, for the Coens, the movies are as good and as imperfect a religion as any, or even better. I'm with them.

Posted by Grande Enchilada at 9:00 AM