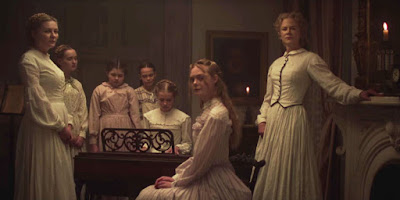 I saw the original Don Siegel movie with Clint Eastwood when I was in my teens and I was deeply disturbed by Geraldine Page's Miss Martha, headmistress of a boarding school for girls during the American Civil War. I'm pretty sure I didn't understand squat, but I could still sense that beneath her steely demeanor there was something very perverse going on. I have yet to see it again, but in the meantime, I cannot fathom why Sofia Coppola was given the best director prize at Cannes for her remake this year, unless for shameless tokenism.
I guess that Coppola wanted to retell this bizarre sexual cat and mice tale through the female gaze, an idea with enormous potential. I can imagine what a gritty, ruthless filmmaker like Lucrecia Martel (La Ciénaga) could do with this material.
Alas, Coppola's effete version is neither atmospheric, nor claustrophobic, nor creepy, nor disturbing, nor suspenseful, nor horrific, nor particularly interesting. It takes a lot of pointless effort to strip a Southern Gothic of camp and charisma, but that's what happens. Her actresses went to great lengths to perfect their genteel Southern accents, but none of them seem to have any concept of what it felt like to be from the South, and what that war meant to their world of cotillions and slaves. There is no real sense of loss, or humiliation, not even after Miss Martha (Nicole Kidman, miscast and misdirected) explains that her school once used to be a grand old antebellum mansion. No effort is made to impress on the audience what it meant for a woman alone to take on that job: much-diminished circumstances. There is no hunger for the world, no desperation. Instead, it all looks and feels like a Laura Ashley catalog. Coppola is not invested in psychological motivation, or in ambiguity. Hence, the reaction of the women at the arrival of a handsome wounded Yankee soldier is completely superficial. It's desire lite.
Now, if a wounded enemy soldier (the vulnerable, wounded male, an object of female fantasies since time immemorial) shows up at a secluded boarding school for girls in bloom and this soldier happens to be Clint Eastwood, people of all genders will understand how this could wreak havoc in all those straitlaced young bosoms. Had it been Michael Fassbender, that school would have exploded in a ball of fire the moment he crawled through the door. But Coppola makes the mistake of giving the honors to Colin Farrell, who is simply not worth the trouble. To be fair to him and to the rest of the good actors in this movie, Nicole Kidman, Kirsten Dunst (excellent), Elle Fanning and a gaggle of solid young actresses, it's not their fault. They have only been instructed to play the top note, and this story is all about the murky notes at the bottom, what oozes beneath those stuffy crinolines, what really flutters in the women's wildest hearts.
Posted by Grande Enchilada at 4:51 PM