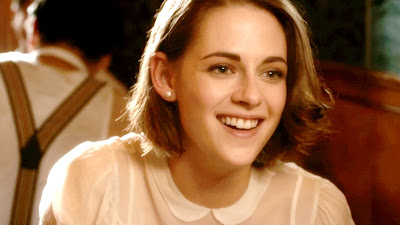 To be honest, the only reason that compelled me to see the latest Woody Allen film is that the cinematographer is Vittorio Storaro. His masterly touch certainly takes it to a higher level. His images are creamy. Some are breathtaking, like a shot of two lovers on the beach. He is beautifully abetted by the production design of the great Santo Loquasto, a longtime Allen collaborator.
So what about the movie, you might ask. Well, it's classic late-period Allen, skimpy on characters and plot, and dusted lightly with ancient jokes. Still, Café Society is not as slapdash as some of his recent outings. It is imbued with a feeling of nostalgia for the 1930's, a time when women were glamorous, nightclubs were swanky and popular music was masterful (as usual, the old standards soundtrack is delightful). Café Society is about the loss of first love; a bittersweet look at the impossibility of everlasting romance.
It is also a movie about different kinds of Jews. There are working class Jews, communist Jews, Hollywood Jews, and gangster Jews, all in one family. Allen has genuine warmth for this neurotic clan. This loving nostalgia and a good cast make this movie enjoyable.
Jesse Eisenberg plays Bobby Dorfman, a young man from the Bronx who moves to Los Angeles in search of a job. Unlike many actors who have tried and failed, Eisenberg refuses to imitate Allen's nerdy shtick. He is a canny actor, but it would be nice if he toned down that neurotic energy and cerebral edge of his. Still, he is effective as the fish out of water in glamorous Hollywood who gets a job at his uncle Phil's agency. Phil Stone (Steve Carell) is flashy, rich, and as a powerful agent, namedrops stars with panache. After much pleading, Bobby starts running errands for him and falls in love with his secretary, Vonnie, played with melancholy poise by Kristen Stewart. I didn't take Stewart seriously when she was younger and eternally pouty, but she has found her stride and here she is mesmerizing. Allen himself provides a narration that is unessential, but which aids in the feeling of longing for the past. The rest of the characters seem to have been imported from Annie Hall. The fabulous Jeannie Berlin plays Bobby's mom, and Corey Stoll plays his gangster brother, wasted without a part and saddled with an unnecessary wig (but I'll take him whenever and however I can get him). Blake Lively plays another Veronica, the other "shiksa" goddess for whom Bobby ends up falling. I wonder if the multiple Veronicas are Allen's homage to Kristof Kieslowski's The Double Life Of Veronique.
The plot is at once simplistic and convoluted and it surprises no one, but the palpable feeling of ruefulness, of losing your love to lesser but richer prospects, of the useless yearning for what could have been, is moving. This movie has more feeling than most of Allen's recent films. He has an opportunity to dwell on the uneasy combination of Hollywood glamour and bickering striving Jews, of Jews straddling between their family traditions and making it in the world, but Allen is too lazy to stitch these strands together insightfully. For a far more profound and devastating look at this topic, I heartily recommend Indignation, based on the novel by Phillip Roth, also playing.
Storaro's magic and that lovely sense of loss are about the only thing that works for Café Society. The jokes feel ancient, and some of the attitudes, like a cruel, uncomfortable scene between Bobby and a hooker are way past their expiration date.  I am also nostalgic for legendary swanky nightclubs that I never knew, wonderful popular music, and people dressing up to go out, but not for the kind of casual, rancid misogyny that is ever present in Allen's films.  He is not one with the times.
Posted by Grande Enchilada at 6:17 PM