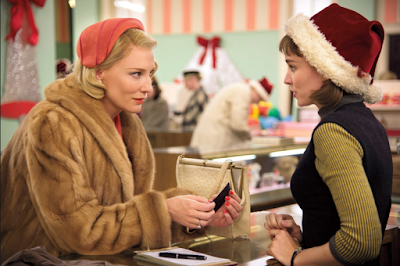 Perhaps it is by design that Todd Haynes' movie, based on a novel by Patricia Highsmith (well adapted by Phyllis Nagy) feels so airless. After all, lesbians in the 1950s must have felt claustrophobic. Ed Lachman's gorgeously muted cinematography suggests a repressive, lonely world. It feels like being inside an Edward Hopper painting: alone in the crowd.
Carol (Blanchett) is a rich lady with a small child and a marriage on the rocks, and Therese (Mara) is a salesgirl at a department store and budding photographer. They meet as Carol is browsing for Christmas gifts and take a shine to one another. Therese is beguiled by Carol's glamor, and Carol sees something beautiful and dangerous in that deceivingly mousy girl. Their gaydar goes off immediately. In those days, gaydar was a finely tuned instrument, and essential to recognize other kindred spirits who lived in the shadows.
Because Carol and Therese are women, they have to use a language of glances and gestures while they try to pass off as straight in a world that denies them existence. At the same time, because they are not even supposed to happen as a couple, they can meet in public and pretend that whatever is going on is anything but a romance. Not only are they attracted to one another, but there is a difference in age and in social class. The movie illustrates this tension between private desire and outward appearance to perfection. Powerful feelings simmer under the surface until they have to blow up. It is a hard way to live. Even though much has changed in terms of gay rights since then, in the personal realm, this negotiation of sexuality with the world at large is still dramatic for a lot of people. This is what the movie brings to light.
Carol serves as an interesting contrast to our own times. Today, even those who disapprove have to concede that homosexuality exists and gay people have successfully demanded parity and dignity. The story's setting in the 1950s, that decade of American prosperity, puritanism and witch hunts, takes us back to an era in which there was a collective will to smother and penalize homosexuality by placing it under the category of perversion, and in male instances, crime. As long as it wasn't outward, people pretended it didn't exist. If it made a sound, it was swiftly punished. Hence, it comes as a bit of a shock that the men in Carol and Therese's lives are viscerally aware of their rebellious strangeness. They argue against it as if they could change it. But they are not villains. Both Carol's husband (Kyle Chandler) and Therese's boyfriend (Jake Lacy), love these women. It is hard on them too.
It's difficult to live a double life, or a life that seems charmed but is deeply unhappy, as is the case with Carol. If divorce was a scandal in those days, imagine lesbianism: Carol was doomed. But she decides to pursue Therese. They take the car, that most available of American freedoms, and go on a road trip together. Therese has less to lose. She is young and ripe for adventure. For Carol, things are harder. She is richer, wiser, older and she has everything to lose.
If there is anything subversive about Carol is that it is a conventional movie. It's a classic love story. It's also a classic melodrama. The characters have terrible obstacles to overcome, as in any story about forbidden love. It just happens to be between two women. This is the point Carol makes: there is no difference between this love and the one society approves of. But this movie is also about pursuing personal freedom, at a great cost, in the face of an uncomprehending society. It's about rebellion.
Everything about Carol is exquisite and exquisitely controlled. It has class written all over it: Lachman's cinematography, excellent editing by Affonso Gonçalves, costumes by the great Sandy Powell, music by Carter Burwell and an amazing soundtrack of pop music of the period.
As in Far From Heaven, Haynes frames this narrative of personal rebellion in genre, namely, 1950's Sirkian melodrama. Perhaps because of this Carol seems more like a beautiful artifact than a story about messy passions. It is too stylized to breathe fire, and something in its composure mutes its emotional and erotic power.
If it has an impact, it's because Blanchett and Mara bring a fierceness to their roles that struggles against all that composure, both in the story and in the telling. They illustrate perfectly the unbearable tension between who they are and who they are expected to be. They are both excellent. Blanchett is a monster actress, and she does not disappoint. But I'm very impressed with Mara, who doesn't seem to take up much space but radiates a quiet and formidable willpower.

Posted by Grande Enchilada at 12:14 PM